Is Unesco World Heritage status for cultural sites killing the things it loves?

Jul 14, 2018 10:00 AM PHT
Facebook Twitter Copy URL
Copied
Achieving Unesco status is an internationally competitive process. Nations want this recognition because they can promote a place or practice as a unique cultural tourism attraction. 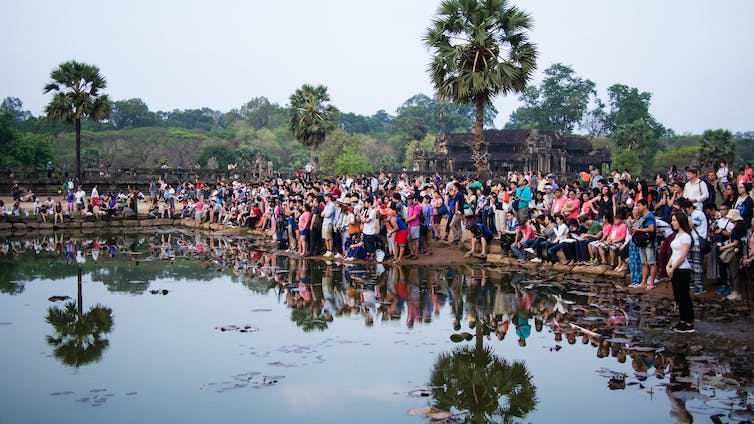 Hoi An is a beautiful coastal town in central Vietnam that escaped the devastation of the American War. In 1999, it was listed as a Unesco World Heritage site because of the charm of its original architecture, river location, and continuity of cultural practices. Unesco recognition has made it a major cultural tourism destination. In 2017, 3.22 million people visited, an increase of 22% on the previous year.

Authorities have introduced a ticketing system for visitors, but its purpose is to raise revenue and record tourist numbers rather than control them. The streets are relatively narrow. With the influx of mass tourism, some streets are impossible to walk in and the town has turned into an “ersatz” version of itself with all buildings turned into cafes and shops to service tourist needs. Many large tourist buses park for much of the day on the edges of the old town, to disembark and collect passengers, making an ugly impression as you enter.

The local Vietnamese have been forced to move from the town’s center to live on the outskirts. Ironically, while it is an important cultural tourism destination for its buildings, the culture of Hoi An has changed completely due to mass tourism. From once being a lively trading community, it is becoming a theme park.

In Cambodia, meanwhile, Angkor Wat is a major international cultural heritage site. It received Unesco recognition in 1992. From 2004-14 visitor numbers to Angkor Wat increased by more than 300%. While the local authorities have introduced a visitors’ ticket to ostensibly control numbers (and bring in revenue), there are challenges from “wear and tear” as visitors touch structures and walk on ancient paths.

Read more: ‘Sustainable tourism’ is not working – here’s how we can change that

The major challenge for Angkor Wat, however, is uncontrolled tourist development around the site. For instance, the construction of large hotels and the illicit tapping of groundwater have affected the water table beneath the temples, which in turn affects their stability.

While continuing to preserve the temples is not easy, the far greater problem is the lack of planning around the site, which has been left to the whims of the marketplace. Ultimately this unplanned development has the potential to destroy Angkor Wat itself.

The impact of mass tourism anywhere can be overwhelming, but it is compounded in communities in developing countries with less economic resources to undertake adequate protection or planning. The town of Luang Prabang in Laos faces similar issues to Hoi An. The local community is now mostly living outside the old town, which again has been given over to tourists and their needs.

Read more: The carbon footprint of tourism revealed (it’s bigger than we thought)

Other Unesco World Heritage sites around the world are battling similar problems in dealing with mass tourism. The number of people travelling by air internationally has increased by an average of around 7% a year since 2009. This growth is expected to continue at a similar rate.

As far back as 1972, Unesco adopted the Convention for the Protection of the World Cultural and Natural Heritage. Two more conventions, adopted in 2003 and in 2005, further protect Intangible Cultural Heritage and the Diversity of Cultural Expression. The intent of these was to draw attention to cultural sites and practices to ensure their ongoing protection and longevity.

Achieving Unesco status is an internationally competitive process. Nations want this recognition because they can promote a place or practice as a unique cultural tourism attraction.

Communities and nations do have obligations when they receive Unesco recognition. They are expected to undertake various measures to protect the site or practice and ensure proper planning occurs. But while more attention may be applied to restoration or reduction of unsympathetic behavior (for example, at Angkor Wat the authorities have introduced rules about appropriate clothing to be worn by visitors), the broader implications of increased visitation may not have been considered.

Read more: Friday essay: war crimes and the many threats to cultural heritage

Encouraging tourism as a means to improve the economic situation of communities can, in fact, destroy their uniqueness and cultural value. With the continuing increase in tourism, the situation will inevitably worsen.

The focus is at present on earning money from the site/practices, not preserving them. Mass tourism can damage sites irreversibly. Communities and countries have some hard choices to make.

With colleague Dr Mariana Vecco, I recently published a research article about these issues. Some of our recommendations for vulnerable sites include:

All of this should occur if Unesco status is to be continued. However, there is also a bigger conversation we need to have – should tourists visit vulnerable sites and practices?

Hoi An is still a beautiful town but the presence of “wall to wall” tourists mars it. Sadly, as long as Unesco status is used more as a marketing device than a route to preservation, the situation will continue to deteriorate. – The Conversation | Rappler.com