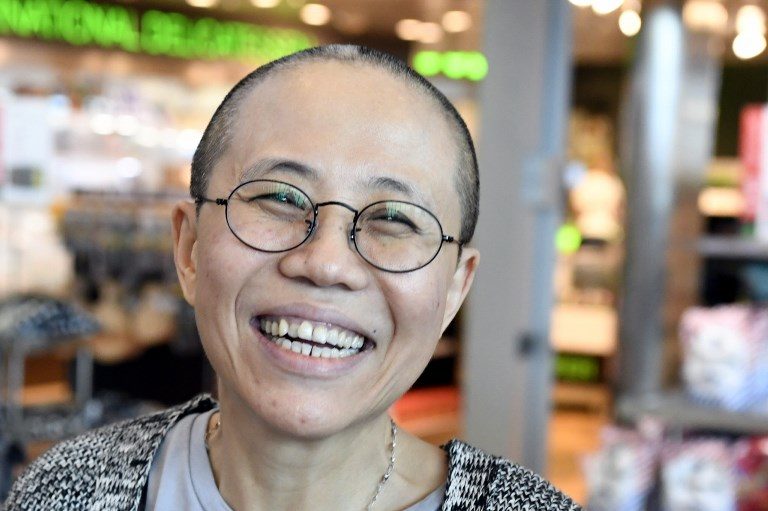 Facebook Twitter Copy URL
Copied
In an emotional phone call with Liao Yiwu recently, Liu Xia says, 'They should add a line to the constitution: 'Loving Liu Xiaobo is a serious crime – it's a life sentence'.'

BERLIN, Germany – Liu Xia, the widow of Chinese Nobel dissident Liu Xiaobo, arrived in Germany Tuesday, July 10, after she was released from years of de facto house arrest in China.

Despite facing no charges, the 57-year-old poet had endured heavy restrictions on her movements since 2010 when her husband won the Nobel Peace Prize – an award that infuriated Beijing.

After being allowed to leave China, Liu flew via Helsinki to Berlin, where she arrived just days before the first anniversary of her husband’s death from liver cancer.

Berlin-based dissident Liao Yiwu and German Nobel laureate Herta Mueller were among a dozen people waiting to greet her at the airport, shouting out her name from the viewing terrace as she emerged from the aircraft.

But Liu immediately boarded a black van parked on the airfield tarmac and was whisked away without making any remarks.

Liao had earlier voiced his joy on Twitter, saying: “I am so, so, so happy! Finally, finally, Xia is coming today!!”

Liu had become a cause celebre and was seen as a test case for China’s attitude to human rights, with activists and foreign powers urging Beijing to allow her to leave the country.

Her husband Liu Xiaobo, a veteran of the 1989 Tiananmen Square protests, died last year of liver cancer while serving an 11-year sentence for “subversion”.

In an emotional phone call with Liao recently, Liu said, “They should add a line to the constitution: ‘Loving Liu Xiaobo is a serious crime – it’s a life sentence’.”

With Beijing’s rights record in the spotlight, a court in central China sentenced another prominent Chinese political campaigner to 13 years in jail for “subversion”, just hours after Liu Xia left the country.

Close friend Ye Du, speaking to Agence France-Presse (AFP) before Liu’s departure, said she was suffering from “very severe” depression, adding she would “sometimes faint” and was taking medicine to sleep.

Another friend who has spoken to her several times said she was in “bad shape, physically and psychologically”.

She was finally given a passport last week, this friend, who did not wish to be named, told AFP.

“I hope Liu Xia can find some personal peace and restore her health in Germany,” said UN High Commissioner for Human Rights Zeid Ra’ad Al Hussein, who called her fate in recent years “nothing short of tragic”.

Chinese authorities had consistently maintained Liu was free but imposed severe restrictions on her movement and kept her under constant surveillance.

In May, several foreign diplomats who tried to visit Liu at her apartment amid concerns over her health were denied access.

Hua Chunying, a Chinese foreign ministry spokeswoman, said Liu’s travel to Germany for medical treatment was “of her own free will”.

US State Department spokeswoman Heather Nauert welcomed the decision to release Liu “from house arrest” and allow her to leave China “as she long wished”.

“We urge China to release all prisoners of conscience and respect the human rights and fundamental freedoms of all,” she said on Twitter.

Patrick Poon from Amnesty International said it was “really wonderful” that Liu was finally allowed to leave.

But he voiced concern for her brother Liu Hui who remains in China and said she “might not be able to speak much for fear of her brother’s safety”.

In Hong Kong, pro-democracy activists celebrated at a memorial to Liu Xiaobo adorned with the couple’s pictures.

“I’m in a sea of joy,” said veteran activist “Long Hair” Leung Kwok-hung as he drank a toast to her.

At Liu’s Beijing apartment building on Tuesday, two men guarded the entrance and questioned anyone who came near while at least two others patrolled the park outside.

But despite heavy security, AFP gained access to her apartment on Monday, July 9, and saw little sign she was preparing for an imminent departure. Liu declined to give a formal interview, citing fears for her younger brother.

Pictures of the couple in happier times lined the walls.

Liu’s departure came during a visit by Chinese Premier Li Keqiang to Berlin, where he met German Chancellor Angela Merkel, although a Chinese foreign ministry spokeswoman denied any “association or link between this incident and the visit”.

Merkel has spoken out frequently on Chinese human rights abuses and is believed to have pushed for Liu’s release during her May visit to Beijing, where she met the wives of detained human rights lawyers.

Analysts, however, pointed to the upcoming anniversary of Liu’s husband’s death as a reason for the timing.

“Perhaps the Chinese government realized that as the anniversary of Liu Xiaobo’s death approaches, keeping his widow under house arrest simply shows the Chinese to be petty, cruel and vindictive – not the image it’s trying to project to the world,” said Elaine Pearson from Human Rights Watch.

Others said Beijing might be trying to curry favor with Western powers ahead of an EU-China summit next week, as China needs Europe in the trade battle with the United States.

A Western diplomat said: “It has to do with China’s image at a time when it is fighting a trade war with the United States.”

“China needs to let some steam off and it is conducting a charm offensive targeted at the rest of the world.”

This however does not herald an improvement in human rights, this diplomat said, adding that on the contrary, “we can see it is getting worse”. – Rappler.com