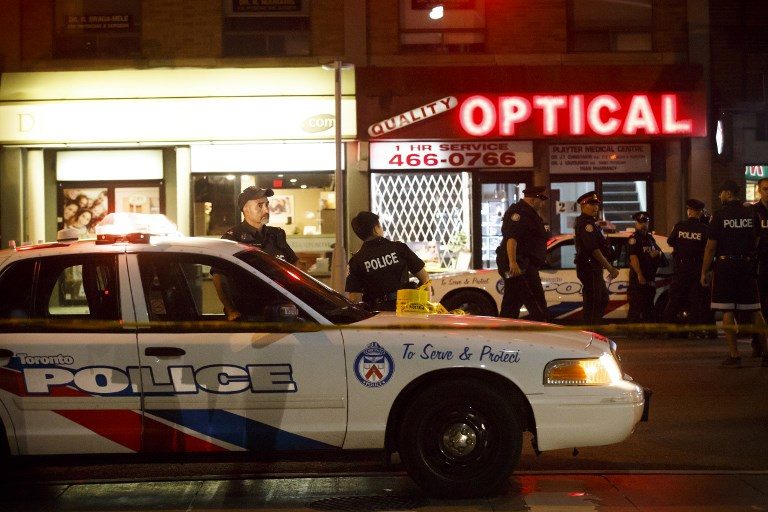 Facebook Twitter Copy URL
Copied
(6th UPDATE) The gunman opens fire on pedestrians, killing two. The suspect is later found dead in an alley after an exchange of gunfire with police

TORONTO, Canada (6th UPDATE) –  A 29-year-old gunman opened fire on pedestrians in a bustling Toronto neighborhood, killing two and wounding a dozen others, police in Canada’s largest city said Monday, July 23, adding the suspect was found dead in an alley after an exchange of gunfire with police.

A video clip posted by Canadian media appeared to show a dark-clad man walking on the sidewalk in Toronto’s Greektown neighborhood Sunday night and then turning to aim and fire a handgun.

The unit, which investigates police-involved shootings, said officers located the man on a cross street “and an exchange of gunfire took place.”

“The man fled the area and was located deceased on Danforth Avenue,” it said.

Toronto police chief Mark Saunders had said earlier that one of the victims was a young woman, and that a young girl was in critical condition. It put the number of wounded at 13.

The gunman, who police said was 29, was not identified by name and a motive for the shooting in a district of cafes and restaurants was not immediately known.

Officers, some armed with rifles, sealed off Danforth Avenue, Greektown’s main street, after getting the call around 10:00 pm (0200 GMT Monday).

“There was a lot of shots. It would shoot, there’d be a pause, we heard more shooting, and then a pause and then more shooting,” The Globe and Mail quoted John Tulloch, who was out for a walk at the time, as saying.

Jody Steinhauer told CBC News she was at a neighborhood restaurant with her family when she heard what sounded like 10 to 15 blasts of firecrackers.

She said she was told to run to the back of the restaurant.

“We started to hear people scream out front,” Steinhauer told the broadcaster.

Ontario’s new Premier Doug Ford called it a “horrific act of gun violence” and said his heart went out to the victims.

“Guns are too readily available to too many people,” Tory told a news conference.

Tory added that details of the latest incident remained sketchy and urged people to stay calm.

“We have to figure out what happened here. We don’t know,” he said.

Last week, Toronto police started implementing the enforcement component of their “gun violence reduction plan.” That includes around 200 additional officers on shift in particular neighborhoods between the hours of 7:00 pm and 3:00 am — when most shootings occur.

The Greektown shooting comes about three months after the city was shaken by the deaths of 10 people killed by a man with an apparent grudge against women who drove into them on a busy street in Toronto’s north end. – Rappler.com