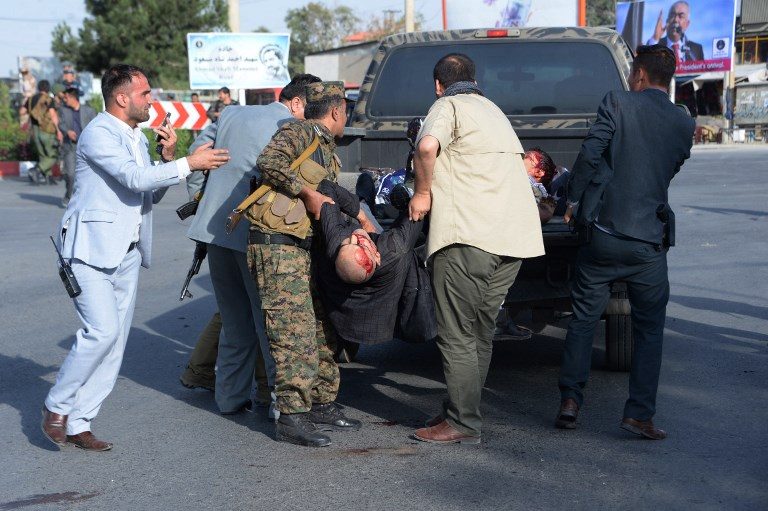 KABUL, Afghanistan – The death toll from a suicide attack near Kabul international airport has risen to 23, the health ministry said on Monday, July 23, with an Agence France-Presse driver among the dead.

At least 107 others were wounded in Sunday’s powerful explosion, which happened as scores of people were leaving the airport after welcoming home Afghan Vice President Abdul Rashid Dostum from exile.

The health ministry warned the latest toll, which initially had been 14 dead and 60 wounded, could change.

AFP driver Mohammad Akhtar, 31, was among those killed when the suicide bomber blew himself up.

The father of 4 had been on his way to work the night shift.

The attack was claimed by the Islamic State group (ISIS) through its official Amaq news agency, according to the SITE intelligence monitoring group.

Despite being linked to a catalogue of human rights abuses in Afghanistan, Dostum was mobbed like a celebrity as he arrived in Afghanistan after more than a year in exile.

He was travelling in an armoured vehicle and narrowly escaped the attack.

Dostum fled to Turkey in May 2017 after being accused of organising the rape and torture of a political rival.

He had denied the allegations and said his departure was for medical check-ups and family reasons.

Seven of Dostum’s bodyguards have been convicted of the sexual assault and illegal imprisonment of Ahmad Ishchi, a former governor of the northern province of Jowzjan, in 2016. – Rappler.com