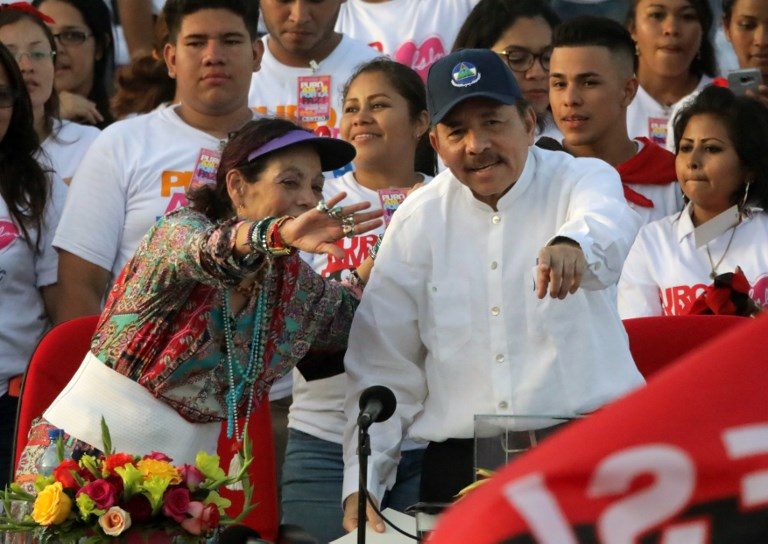 WASHINGTON DC, USA – Nicaraguan President Daniel Ortega insisted Monday, July 23, he will serve out his term until 2021, defying protesters demanding his resignation in 3 months of unrest that have left nearly 300 people dead.

“Our electoral period ends with the elections of 2021, when we will have our next elections,” the former revolutionary leader told Fox News, adding that he would not countenance opposition demands for early elections.

“To move up the elections would create instability, insecurity and make things worse,” he said.

The 72-year-old leader, who has ruled Nicaragua for a total of 22 years since his Sandinista revolution toppled a US-backed dictator in 1979, declared that the deadly unrest rocking his country since April has in fact ended.

“It’s been a week now that the turmoil has stopped. Matters are becoming more normal in the country,” he said.

He acknowledged that peaceful demonstrations for and against his government were ongoing.

The assertion that Nicaragua’s turmoil was over followed lethal offensives by police and pro-government paramilitaries against protest hubs earlier this month.

The Nicaraguan Center for Human Rights said Monday that 292 people have been killed in 3 months of protests and repression by police and paramilitaries using firearms, raising a previous toll.

The unrest began as a protest against a pension reform plan that has since been dropped. But that anger mushroomed into a broad campaign against Ortega and his wife, Vice President Rosario Murillo, who are accused by critics of running a corrupt leftwing dictatorship.

The human rights group said authorities have arbitrarily arrested hundreds of people in a continuing crackdown on the opposition.

Many were seized on suspicion of taking part in marches against Ortega’s government, or providing aid to those agitating against the president, it added.

Thousands of students staged dueling marches for and against the government on Monday. Those opposed to Ortega carried crosses with backpacks hanging from them – symbols of students killed in the unrest.

A pro-government student union voiced support for Ortega and referred to protesters as terrorists and putschists.

In the interview Ortega rejected allegations that he controlled the pro-government paramilitaries seen acting in concert with the police.

He instead accused Nicaraguan political groups of heading rival anti-government militias, which he said had sought financing from drug traffickers and the United States. He accused those militias of killing “tens” of police officers in the unrest.

“None of the peaceful demonstrations” have been attacked by police, he said.

Ortega denied reports by protesters and priests that his forces shot dead two young men holed up in a Managua church that came under sustained fire on July 13-14.

It was also wrong to say priests were being targeted, he said.

“There’s not a single priest that we are persecuting,” Ortega said, adding that he welcomed efforts by the Catholic Church to mediate talks between his government and opposition groups.

The president also dismissed detractors’ claims that he was intent on starting a ruling dynasty by making Murillo his vice president in 2016.

“It never occurred to me to set up a dynasty,” he said. “My wife, it’s the first time ever she’s been vice president.”

Ortega said he was speaking to Fox News after years of refusing interviews with foreign media because he wanted the United States to show Nicaragua “respect.”

“The history of our relations with the United States has been painful. I don’t want to repeat it,” he said, criticizing a resolution against Nicaragua that US lawmakers were reported to be preparing.

He also hit out at what he called “a campaign of lies, terrible lies to try to hurt the image of Nicaragua and of its government.”

The political crisis has hurt the economy of Nicaragua, one of the poorest countries in the Americas.

Standard & Poor’s on Monday downgraded its debt rating for Nicaragua from B+ to B, with a negative outlook. – Rappler.com