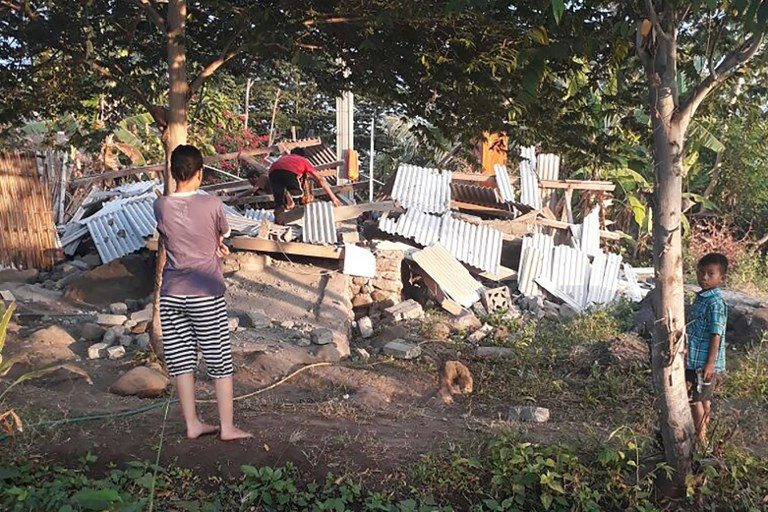 Five children were among those killed by the shallow 6.4-magnitude early-morning quake, which sent people running outside in panic and triggered landslides on popular mountain hiking routes. (READ: Lombok: The island of breathtaking beaches)

Scores of aftershocks sparked fear among survivors. More than 120 were recorded, the biggest with a magnitude of 5.7, Indonesia’s meteorology agency said.

Local officials have declared a 3-day state of emergency. President Joko Widodo is due to visit the island Monday morning, July 30, his spokesman said.

“Based on reports, 14 people died, 162 were injured and thousands of homes were damaged,” Indonesian disaster mitigation agency spokesman Sutopo Purwo Nugroho said in a statement, adding that five of the dead were children.

One Malaysian was killed and 6 injured, the Malaysian foreign ministry said.

“All of them were at the foot of Mount Rinjani when the incident happened,” it said, referencing the spectacular volcano that dominates the island.

The 30-year-old victim was inside a restroom when the entire building collapsed and crushed her, the New Straits Times quoted another Malaysian climber, Khairul Azim, as saying.

Khairul said his own group was unable to leave the Sembalun area because many roads including the main one had been damaged.

The constant aftershocks sparked terrified shouts among scores of people made homeless in the eastern village of Sembalun in the district of the same name, an Agence France-Presse (AFP) reporter said.

Some 200 people from 35 families whose house were damaged or destroyed had pitched tents there. The roof of a health clinic had collapsed and its walls had cracked.

“People are traumatized and too scared to return home for fear the aftershocks could destroy their homes completely,” the reporter said.

“Everytime there is an aftershock they cry out in fear and tremors can still be felt constantly.”

Evacuees told AFP they badly needed blankets and instant food because there was no time to bring anything when they fled their homes.

Popular trekking trails on Mount Rinjani were closed because of landslides, according to the disaster agency.

One local trek organizer described how rocks rained down on two Spanish hikers and their guide as they were caught on a mountain trail.

“My trekking guide who was accompanying two tourists from Spain suffered from minor injuries during the jolt. They were hiking from Segara Anak Lake to Plawangan and rocks were falling on them during the quake,” said Karyadi, the owner of a guesthouse where the pair were staying.

“Our guests were in shock because of the incident,” said Karyadi, who like many Indonesians goes by one name.

The epicenter of the earthquake struck 50 kilometers northeast of Lombok’s main city Mataram, the United States Geological Survey said, far from the main tourist spots on the south and west of the island.

USGS said two of the aftershocks measured more than 5-magnitude.

The jolt was felt some 100 kilometers away in the bustling holiday island of Bali, although there were no immediate reports of damage there.

“The earthquake was very strong… and everybody in my house panicked, we all ran outside,” said Zulkifli, a resident of North Lombok near the epicentre.

“All my neighbours also ran outside and the electricity was suddenly cut off,” Zulkifli told AFP.

No tsunami alert was issued.

“People in East Lombok and Mataram felt the strong quake for 10 seconds, residents were panicking and running outside of their homes,” Nugroho said earlier, adding people had run for open spaces such as football fields.

At the holiday island’s hotels, tourists raced outside as the quake struck.

At the Katamaran Hotel and Resort in Senggigi beach, some 30 guests gathered in the lobby for around half an hour before venturing back to their rooms.

“They calmed down and returned to their rooms once we explained the earthquake did not trigger a tsunami. Everything is back to normal now,” receptionist Ni Nyoman Suwarningsih told AFP.

The quake also rocked the tiny Gili islands off northeast Lombok, which are popular with honeymooners, divers and partygoers.

“Fortunately there was no panic during the earthquake even though it was quite strong,” said Lilis Letisha, receptionist at the Ombak Paradise Hotel on Gili Air island.

Indonesia, an archipelago of thousands of islands, sits on the so-called Pacific Ring of Fire, a seismic activity hotspot.

In 2004 a tsunami triggered by a magnitude 9.3 undersea earthquake off the coast of Sumatra  in western Indonesia killed 220,000 people in countries around the Indian Ocean, including 168,000 in Indonesia. – Rappler.com