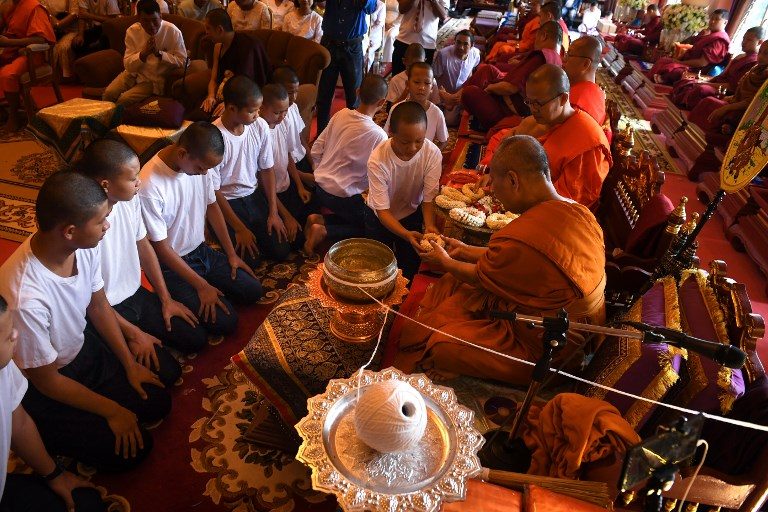 Facebook Twitter Copy URL
Copied
11 of the boys, together with their coach, were ordained to 'make merit' for late rescue diver Saman Kunan

MAE SAI, Thailand – The Thai boys freed from a flooded cave in a rescue bid that gripped the world left a Buddhist monastery Saturday, August 4, 11 days after ordaining as novice monks to honor a diver who died during the mission to save them.

The ordeal of the “Wild Boars” football team dominated global headlines as divers worked round the clock to extract the group from the flooded chambers and twisted, narrow passages of the Tham Luang cave in northern Thailand.

In a dangerous and unprecedented rescue, the 12 boys and their 25 year-old coach were sedated and carried through the waterlogged chambers by divers, ending a nearly 3-week saga.

But joy at the rescue was tempered by grief at the death of former Thai Navy SEAL diver Saman Kunan, who died while installing oxygen tanks along the rescue route.

11 of the boys and their coach ordained to “make merit” according to Buddhist ritual for “Sergeant Sam”, as the diver is now affectionately known across Thailand.

One player, Adul Sam-on, was not ordained as he is a Christian.

They received a Buddhist blessing from monks as they asked in unison to leave the temple, each adding “I am now a layman”.

Their coach Ekkapol Chantawong remained in the temple, where he has become a full monk as he is an adult.

Thailand is a Buddhist-majority country and the faith is weaved tightly into daily life.

Family and friends waited for the boys at a reception hall, facing a a table of offerings where the centrepiece was a large photo portrait of a smiling Sergeant Sam.

Authorities have told the media to give the teammates time to adjust to their lives.

But interest in the remarkable rescue remains frenzied in and outside Thailand, where production houses are looking to make a Hollywood-style film.

After entering Tham Luang following football practice on June 23, the children and coach were quickly pushed deeper inside the cave by monsoon flooding, and were only found 9 days later by British divers.

They later explained that they survived on rainwater dripping from rocks.

Expert divers involved in the rescue mission which began days later said they had grave doubts the whole group would survive.

All 13 made it out safely. – Rappler.com