Malaysia to shelve China-backed projects worth $22B 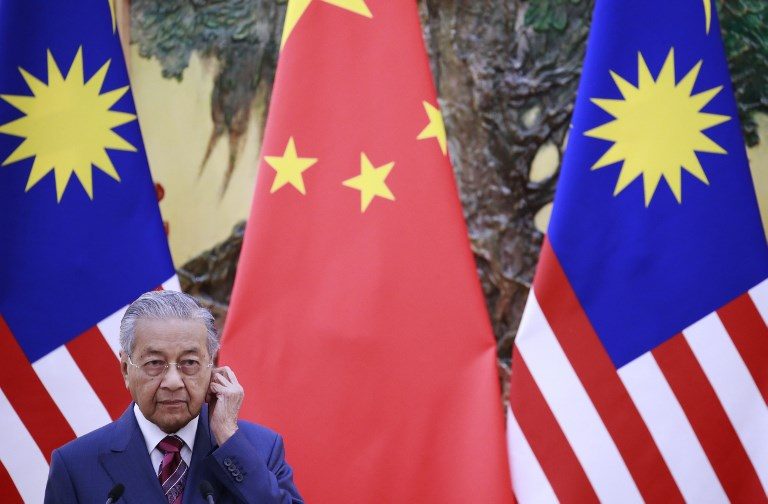 BEIJING, China – Malaysia will shelve 3 China-backed projects worth a total $22 billion until the debt-laden Southeast Asian nation can afford to pay for them, Prime Minister Mahathir Mohamad said Tuesday, August 21, during a visit to Beijing.

The projects include a railway connecting Malaysia’s east coast to southern Thailand and Kuala Lumpur, and two gas pipelines.

“I explained to (the Chinese leaders) why we can’t have the ECRL (East Coast Rail Link),” Mahathir told Malaysian reporters at the end of his 5-day visit, saying the project “will be deferred until such time when we can afford (it)”.

“It’s about borrowing too much money, which we cannot afford, we cannot repay, and also because we don’t need those projects for Malaysia at this moment… our problem now is how to solve our financial deficit.”

Mahathir is trying to reduce Malaysia’s national debt, which has ballooned to some $250 billion.

Chinese foreign ministry spokesman Lu Kang acknowledged that “any cooperation between the two countries will inevitably lead to problems of one kind or another”.

“We take a long-term view of the relationship between our two countries and will resolve the issue through dialogue and negotiation,” Lu told a regular press briefing.

The Malaysian leader also warned against “a new version of colonialism happening because poor countries are unable to compete with rich countries just in terms of open free trade”.

The $20-billion rail project was given to China’s largest engineering firm, the China Communications Construction Company, and mostly financed by a loan from the Export-Import Bank of China.

Malaysia’s finance ministry said in July that 88% of the cost of the two gas pipelines worth 9.4 billion ringgit ($2.32 billion) had been paid to their Chinese contractor despite only 13% of the work being completed.

One pipeline is in Malaysia’s Sabah state on Borneo island and the other runs from Malacca in peninsular Malaysia to the northern state of Kedah.

“We do not find the need for… (the pipeline projects),” Mahathir said. “It costs too much money. And we have to cancel or defer it to a later stage.”

In May, Mahathir shelved separate plans to build a high-speed railway between Singapore and Malaysia which had been agreed several years ago, saying it was too costly.

Despite the threat to revise China-linked contracts, Mahathir sought to strengthen business ties with Beijing during the trip.

China is the top trading partner of Malaysia, which is home to a substantial ethnic Chinese minority.

Relations were warm under the previous government of Prime Minister Najib Razak, and Chinese investment in the country surged as Beijing signed deals for major infrastructure and construction projects.

The projects shelved by Mahathir are part of China’s ambitious Belt and Road initiative, an international trade infrastructure program aimed at reviving Silk Road routes across the globe.

China’s financial largesse has raised concerns over the vulnerability of poorer nations to such massive debt.

Last year, Sri Lanka was forced to hand over majority control of its Hambantota port to China after failing to repay its loans. – Rappler.com