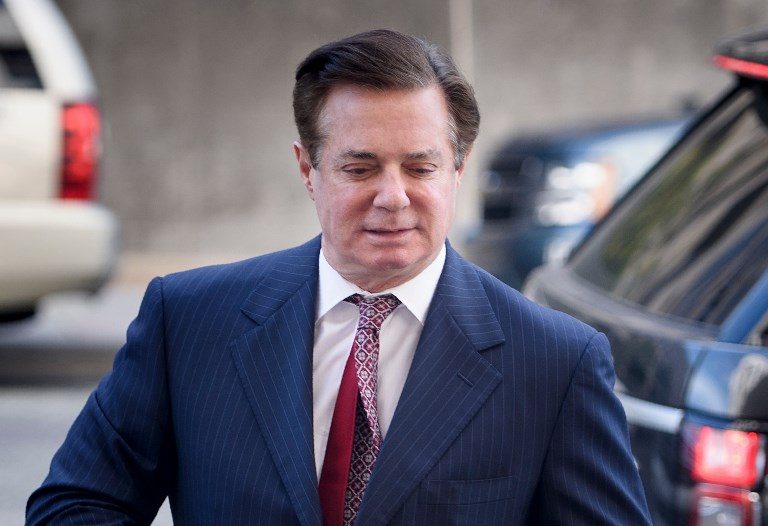 The guilty verdicts on 8 counts are a victory for special counsel Robert Mueller’s investigation into Russian election interference and possible collusion between the Trump campaign team and Moscow.

Trump, who has repeatedly maligned the Mueller probe, views it as a stain on his presidency and has pushed for it to be ended, described Manafort’s conviction as “very sad.”

US District Judge T.S. Ellis declared a mistrial on 10 counts on which the jury was unable to reach a unanimous verdict.

But the jurors found Manafort guilty of the remaining 8 counts: 5 of making false income tax returns, two of bank fraud and one of failure to report foreign bank and financial accounts.

While the 69-year-old Manafort could theoretically live out the remainder of his years in prison as a result of the convictions, a legal expert told Agence France-Presse that his time behind bars would in reality likely last under a decade.

Just before leaving the courtroom, Manafort winked to his wife, who was present for the verdict.

Manafort’s lawyer Kevin Downing said his client was “evaluating all of his options” and thanked the judge for a “fair trial.”

“Mr Manafort is disappointed of not getting acquittals all the way through, or a complete hung jury on all counts,” Downing told journalists.

Reacting to the verdict as he arrived in West Virginia for a rally of supporters, Trump described Manafort as a “good man,” said he was “very sad” at the trial outcome – and once more denounced the Mueller investigation as a “witch hunt.”

Trump had previously suggested that Manafort, who briefly served as his campaign manager, was being treated worse than late American gangster Al Capone.

He has refused to rule out a pardon. Observers have speculated that the prospect of a pardon may have explained why Manafort chose a trial as opposed to a plea deal like his former aide Rick Gates.

The case went to the jury on Thursday, August 16, after 12 days of gripping testimony about hidden bank accounts, betrayal and lavish spending by Manafort on luxury homes, cars, antique rugs and clothes.

Prosecutors outlined schemes Manafort allegedly used to avoid paying US taxes on the millions of dollars he earned in Ukraine, saying he also filed false statements to obtain millions of dollars in loans from banks when his Ukraine consulting fees dried up.

Defense attorneys sought for their part to cast doubt on the credibility of the prosecution’s star witness, Manafort’s former trusted deputy Gates, who took a deal from the government and turned against his former boss.

Trump spent much of Tuesday cooped up at the White House, as two high-profile legal cases with profound implications for his presidency played out on US television screens.

Questioned by a federal judge, Cohen indicated he had paid sums of $130,000 and $150,000 each to two women who claimed they had affairs with Trump, at his boss’s request in order to buy their silence “with the purpose of influencing the election.” – Rappler.com