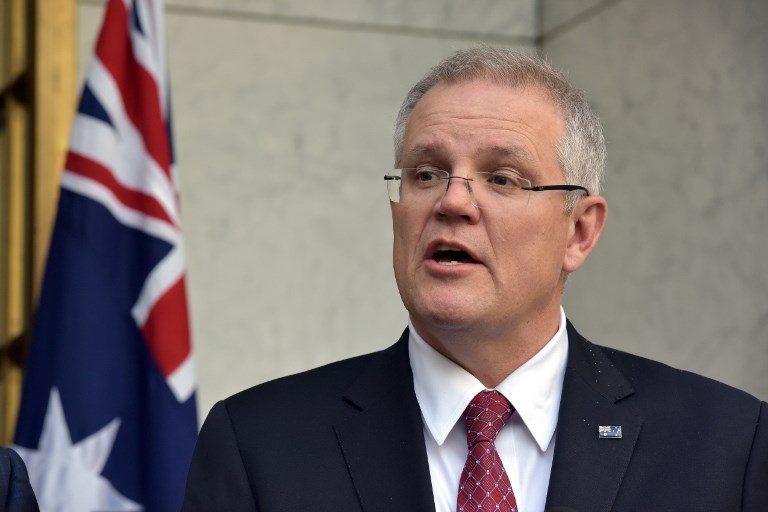 SYDNEY, Australia – Evangelical Christian Scott Morrison, who emerged as prime minister after a bun fight in Australia’s ruling party Friday, August 24, is an ambitious man who has always dreamed of the top job.

Behind the scenes of a battle for the leadership of the Liberal party that erupted this week between ousted Malcolm Turnbull  and right-wing former policeman Peter Dutton, Morrison was quietly canvassing support among his colleagues.

The hardline former immigration minister, who took credit for “stop the boats” – a harsh policy to prevent asylum-seekers from entering Australia at its sea ports – billed himself as a man of faith and family who could get things done.

The 50-year-old’s stealth candidacy reflected aspirations he has had since he entered parliament in 2007, representing the Sydney seat of Cook – the site of Australia’s last race riots.

The son of a policeman, Morrison – known as “ScoMo” – becomes Australia’s seventh prime minister in 11 years, replacing a man who became the latest in a long line of leaders knifed in the back by their allies.

His supporters point to his success with the immigration portfolio from 2013-14, where he implemented the controversial “Operation Sovereign Borders” to stop asylum-seekers arriving in Australia by boat.

They were either sent back to where they had come from or transferred to remote Pacific island camps.

But it also attracted fierce criticism, fueled by Morrison’s refusal to release details of the military operations to turn back boats, sometimes to countries with dodgy human rights records.

Conditions in the camps on Manus Island in Papua New Guinea and on Nauru were slammed by rights groups, with some asylum-seekers languishing there for years.

Critics questioned how the man in charge reconciled his worn-on-the-sleeve Christian faith with his uncompromising immigration stance.

Born May 13, 1968 in the beachside Sydney suburb of Bronte, Scott John Morrison was the younger of two sons, whose parents ran church youth programs.

Morrison himself was an active church member, and met his wife Jenny as a young teenager through the church. The pair married when he was 21.

It took 18 years and multiple rounds of IVF before the first of two children was born, and Morrison dedicated his maiden parliamentary speech to his daughter Abbey Rose.

Morrison worked in the tourism sector at home and in New Zealand before being selected to contest the seat of Cook in 2007.

He credited his win to the “most significant influences on my life – my family and my faith”.

After serving as shadow immigration minister, Morrison moved straight into the government job when the Liberal party took power in 2013.

A short stint in the social services portfolio followed, before he took over the treasury when Turnbull became leader in September 2015.

Morrison presided over Australia’s economy as the government sought to return the budget to surplus and simultaneously cut personal income and small business taxes.

On social issues, Morrison has stood to the right of the more moderate Turnbull, and opposed the legalization of same-sex marriage last year.

But he has also tried to soften his image, appearing on a cooking-with-politicians series that airs on national broadcaster ABC. – Rappler.com