Myanmar army chief must be prosecuted for ‘genocide’ – UN probe 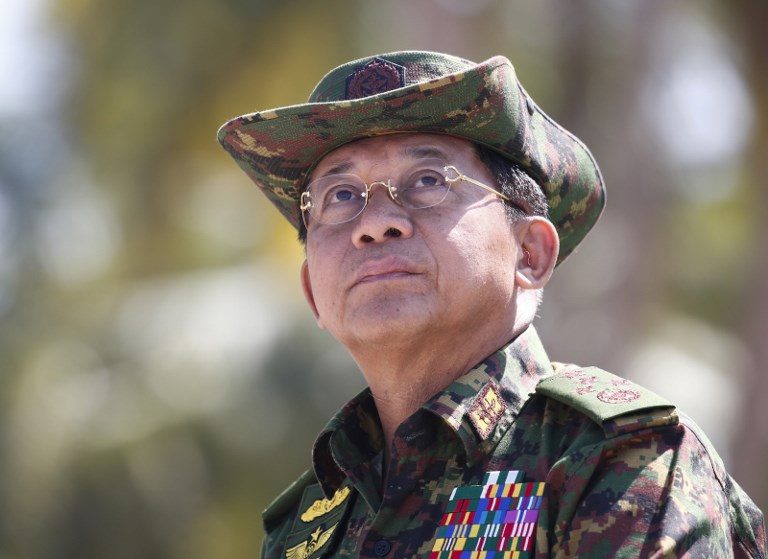 Facebook Twitter Copy URL
Copied
(UPDATED) A UN-backed fact-finding mission into violations in Myanmar said the country's 'top military generals, including Commander-in-Chief Senior-General Min Aung Hlaing, must be investigated and prosecuted for genocide in the north of Rakhine State'

GENEVA, Switzerland (UPDATED) – UN investigators called on Monday, August 27, for Myanmar’s army chief to resign and for him and 5 other top military commanders to be prosecuted in an international court for genocide against the country’s Rohingya minority.

The call prompted Facebook, which has been criticised for allowing hate speech against the Rohingya to flourish, to ban the army chief and remove other pages tied to the country’s military.

Some 700,000 Rohingya Muslims fled northern Rakhine state to Bangladesh after Myanmar launched a brutal crackdown in August last year on insurgents amid accounts of arson, murder and rape at the hands of soldiers and vigilante mobs in the mainly Buddhist country.

Myanmar has vehemently denied allegations of ethnic cleansing, insisting it was responding to attacks by Rohingya rebels.

But on Monday, a UN-backed fact-finding mission into violations in Myanmar said the country’s “top military generals, including Commander-in-Chief Senior-General Min Aung Hlaing, must be investigated and prosecuted for genocide in the north of Rakhine State.”

They should also be investigated and prosecuted for “crimes against humanity and war crimes” against the Rohingya in Rakhine, as well as against other minorities in the northern Kachin and Shan States, the mission said in a report.

The army tactics have been “consistently and grossly disproportionate to actual security threats,” it said.

Speaking to journalists in Geneva, the head of the mission, Marzuki Darusman, insisted that “the only way forward is to call for (Min Aung Hlaing’s) resignation and stepping down immediately.”

The mission, which was created by the UN Human Rights Council in March 2017, concluded in its report that “there is sufficient information to warrant the investigation and prosecution of senior officials in the Tatmadaw (Myanmar army) chain of command.”

“The crimes in Rakhine State, and the manner in which they were perpetrated, are similar in nature, gravity and scope to those that have allowed genocidal intent to be established in other contexts,” it said.

The investigators named six of the country’s top military commanders, adding that a longer list of names could be shared with “any competent and credible body pursuing accountability in line with international norms and standards.”

Criticism was also directed at Myanmar’s civilian leader Aung San Suu Kyi, a Nobel Peace Prize laureate who has been widely attacked for a perceived failure to stand up for the stateless minority.

The report found that she had “not used her de facto position as head of government, nor her moral authority, to stem or prevent the unfolding events.”

While acknowledging that the civilian authorities had little influence on military actions, it said they “through their acts and omissions … have contributed to the commission of atrocity crimes.”

The investigators, who were never granted access to Myanmar, said they based their findings on interviews with 875 victims and witnesses, as well as satellite imagery and authenticated documents, photographs and videos.

The report detailed a horrifying list of atrocities committed against the Rohingya, including murder, enforced disappearance, torture, as well as sexual violence “perpetrated on a massive scale.”

The investigators said their information suggested that an estimate by Doctors Without Borders that up to 10,000 Rohingya had been killed in the 2017 crackdown was “conservative”.

They also found that soldiers had carried out “large-scale gang rape”, sometimes of as many as 40 girls and women at once, in at least 10 Rakhine villages.

“The scale, brutality and systematic nature of these violations indicate that rape and sexual violence are part of a deliberate strategy to intimidate, terrorise or punish a civilian population, and are used as a tactic of war,” the report said.

The investigators warned that the latest wave of violence was part of a “history of abusive military conduct going back at least half a century”.

“The Rohingya are in a continuing situation of severe, systemic and institutionalised oppression from birth to death,” Darusman told reporters.

Pointing to “deeply entrenched” impunity in Myanmar, the investigators said the only chance to obtain accountability was through the international justice system.

They called on the UN Security Council to refer the Myanmar situation to the International Criminal Court (ICC), or for the creation of an ad hoc international criminal tribunal.

They also recommended an arms embargo and “targeted individual sanctions against those who appear to be most responsible.”

The Security Council has repeatedly urged Myanmar to halt military operations and to allow the Rohingya to safely return home, but its initiatives have been limited by council member and top Myanmar ally China, who could also thwart efforts to refer the case to the ICC.

The investigators also highlighted Facebook’s role, describing it as “a useful instrument for those seeking to spread hate”.

The social media platform has been widely used to spread inflammatory content against the Rohingya and has scrambled in recent months to show that it is taking the issue seriously.

“Although improved in recent months, Facebook’s response has been slow and ineffective,” the report said, urging an independent probe of whether posts and messages on the platform had “led to real-world discrimination and violence”.

Shortly after the UN report appeared, the tech giant announced it was “banning 20 Burmese individuals and organisations from Facebook — including Senior General Min Aung Hlaing.”

It stressed that it wanted to prevent them from using the service to “further inflame ethnic and religious tensions.” – Rappler.com