Ex-Australian PM seeks probe into man who ousted him 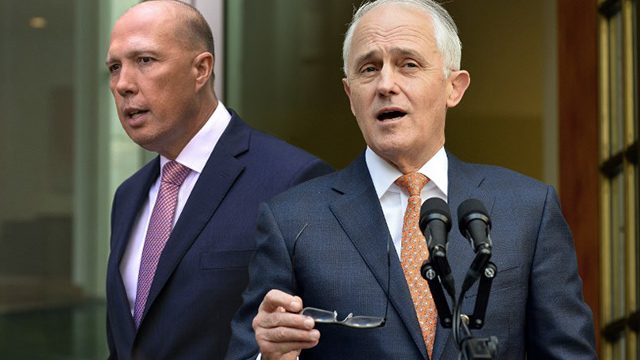 SYDNEY, Australia – Australia’s former prime minister, who was ousted in a bitter party coup, has publicly called for the man behind his demise – a Liberal party colleague – to face investigation.

Ditching any semblance of fraternal loyalty, Malcolm Turnbull, who was Australia’s leader for 3 years, said that Home Affairs Minister Peter Dutton should be referred to the High Court over a potential conflict of interests.

It is just the latest twist in Australia’s brutal politics, which has seen 6 changes of prime minister in the last decade.

Hardline conservative Dutton was instrumental in moderate Turnbull’s political demise, but failed in a bid to replace him in the top job.

The more mainstream Scott Morrison was selected as the new prime minister instead.

But Dutton, a former policeman, faces long-standing allegations of conflicting interests between his family’s childcare business and government policy decisions.

Since leaving office in August Turnbull has reportedly been turning the knife in private, but on Thursday, September 13, he went public with his call for an legal inquiry.

“Given the uncertainty around Peter Dutton’s eligibility, acknowledged by the Solicitor `eral, he should be referred to the High Court,” he tweeted.

Turnbull said he had made that point to Scott Morrison, and “other colleagues.”

Morrison, whose own position looks precarious with elections looming, said he welcomed advice from all quarters.

“Honestly, that’s not something I’m terribly distracted by,” he said. “I respect my colleagues and the contributions and advice that they give.”