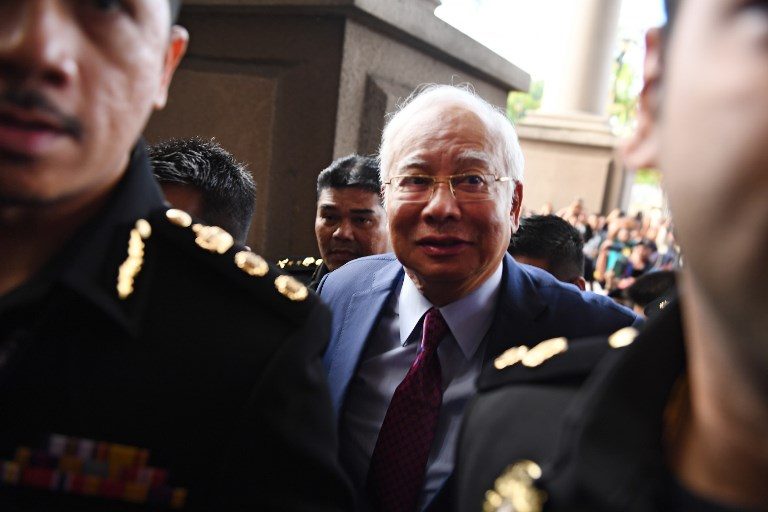 Facebook Twitter Copy URL
Copied
The Malaysian Anti-Corruption Commission says it had detained Najib as part of its investigations into the fund and 'the entry of 2.6 billion ringgit ($628 million) into his personal account'

KUALA LUMPUR, Malaysia –  Malaysia’s toppled leader Najib Razak was arrested on Wednesday, September 19, and will be charged over allegations that $628 million linked to state investment fund 1MDB ended up in his personal bank accounts, officials said.

The Malaysian Anti-Corruption Commission said in a statement that it had detained Najib as part of its investigations into the fund and “the entry of 2.6 billion ringgit ($628 million) into his personal account.”

Allegations that huge sums were looted from the investment vehicle by Najib and his cronies were a major factor in the shock defeat of his long-ruling coalition at elections in May to a reformist alliance headed by Mahathir Mohamad.

Since losing power, Najib has already been arrested and hit with 7 charges related to claims he pocketed some $10 million from a former unit of 1MDB.

However his arrest Wednesday related directly to one of the most damaging allegations in the long-running scandal — that huge sums from the fund flowed into his bank accounts ahead of a hotly contested election in 2013.

When the allegations surfaced in 2015, they dramatically ratcheted up the scandal surrounding Najib and his inner circle.

The attorney-general later cleared him of any wrongdoing, saying the money was a personal donation from the Saudi royal family.

Najib will appear in court Thursday afternoon to be charged over the allegations, the anti-corruption commission said. – Rappler.com