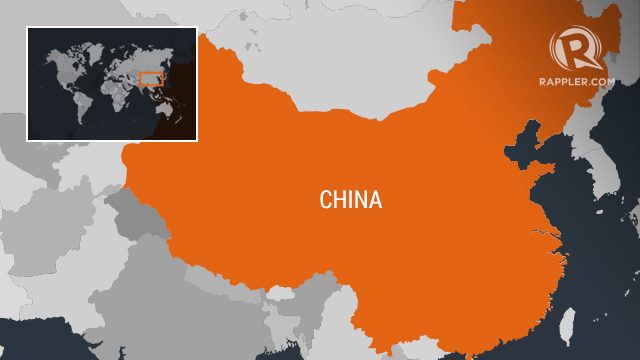 Facebook Twitter Copy URL
Copied
Washington has placed financial sanctions on a department in the Chinese Defense Ministry, and its top administrator, for its recent purchase of Russian fighter jets and surface-to-air missile systems

BEIJING, China – China summoned the US ambassador on Saturday, September 22, to lodge an official protest over sanctions imposed by the United States against a Chinese military organization for buying Russian fighter jets and missiles, state media said.

The announcement came a day after China called on the United States to withdraw the sanctions or “bear the consequences.”

The spat adds to tensions between the two global powers over trade, China’s treatment of religious groups and the Asian country’s claims to disputed islands in the South China Sea.

On Thursday, Washington placed financial sanctions on the Equipment Development Department of the Chinese Defense Ministry, and its top administrator, for its recent purchase of Russian Sukhoi Su-35 fighter jets and S-400 surface-to-air missile systems.

Officials said it was the first time a third country has been punished under the CAATSA sanctions legislation for dealing with Russia, and signalled the Trump administration’s willingness to risk relations with other countries in its campaign against Moscow.

Russia also lashed out at the US sanctions, accusing Washington of playing unfairly and using new measures to squeeze Moscow out of the global arms market.

Kremlin spokesman Dmitry Peskov said Friday that “Washington’s continued sanctions hysterics” dealt a new blow to US-Russia ties but could not immediately say if Moscow would retaliate, or how.

Ministry spokesman Wu Qian said the US move was a “a flagrant breach of basic rules of international relations” and “a stark show of hegemonism” that severely damages relations between the two countries and their militaries, according to the official Xinhua news agency.

United in their resentment of America’s global influence, China and Russia have sought in recent years to tighten up their ties and this month conducted week-long joint military drills in Moscow’s largest ever war games.

US officials said that the US could consider similar action against other countries taking delivery of Russian fighter jets and missiles.

All of them – defense related firms, officers of the GRU military intelligence agency, and people associated with the Saint Petersburg-based Internet Research Agency disinformation group – have been on previous US sanctions lists.

A senior US administration official, speaking on condition of anonymity, insisted the ultimate target was Russia and not “the defense capabilities” of third countries.

CAATSA, or the Countering America’s Adversaries Through Sanctions Act, was passed in 2017 as a tool that gives Washington more ways to target Russia, Iran and North Korea with economic and political sanctions. – Rappler.com