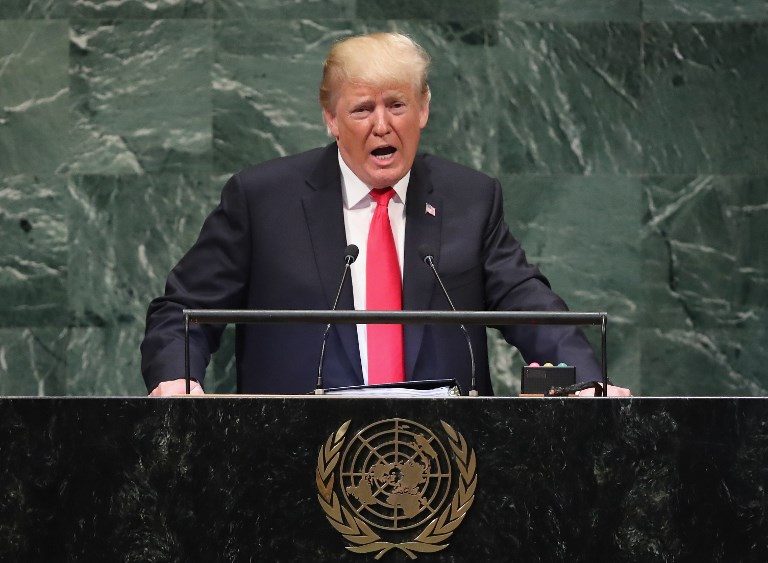 Facebook Twitter Copy URL
Copied
Boasting that his team 'has achieved more than any administration in the history of our country,' Trump was met with laughter, highly unusual in the solemn General Assembly

UNITED NATIONS – President Donald Trump on Tuesday, September 25, urged heavy pressure both on Iran and Washington’s trading partners as he offered a robust defense of the US right to go it alone.

Addressing world leaders at the start of the annual United Nations General Assembly, Trump lashed out at the OPEC oil cartel, China’s trade policies and the International Criminal Court which he vowed the United States would never accept.

Hours before Iranian President Hassan Rouhani takes the same rostrum, Trump denounced the clerical regime as sowing “chaos, death and destruction” and doubled down on the US withdrawal of an international agreement on curbing Tehran’s nuclear program.

But the real estate mogul turned populist leader was comparatively subdued a year after he stunned the global body with his bellicose language on North Korea, including a threat to “totally destroy” Kim Jong Un’s state.

This time around, Trump heralded his own diplomacy on North Korea including a historic summit in June with Kim, saying he has worked to “replace the specter of conflict with a bold and new push for peace.”

With midterm elections in the United States little more than a month away, Trump’s address at times took on the feel of a campaign address as he heralded low unemployment.

Boasting that his team “has achieved more than any administration in the history of our country,” Trump was met with laughter, highly unusual in the solemn General Assembly.

“I didn’t expect that reaction, but that’s okay,” Trump responded.

Iran is a major focus of the annual week of UN diplomacy, months after Trump irritated US allies in Europe by withdrawing from a 2015 agreement under which Tehran has sharply curtailed its nuclear program in return for sanctions relief.

A day after the European Union announced a new legal framework in hopes that companies can keep doing business with Iran and evade incoming US sanctions, Trump demanded that all countries take aim at Tehran – and noted that his decision has been popular among the Shiite-majority nation’s Sunni Arab rivals.

“We cannot allow the world’s leading sponsor of terrorism to possess the planet’s most dangerous weapons,” Trump said, in an allusion to Tehran’s support for Islamic militant movements such as Hamas and Hezbollah.

“We cannot allow a regime that chants ‘Death to America’ and that threatens Israel with annihilation, to possess the means to deliver a nuclear warhead to any city on Earth,” he said.

“We ask all nations to isolate Iran’s regime as long as its aggression continues.”

Trump robustly attacked the “globalist” view of the world – shared by many at the United Nations and on the political left in the United States – and vowed: “America will never apologize for protecting its citizens.”

He said that the UN-backed International Criminal Court has “no jurisdiction, no legitimacy and no authority.”

His national security adviser John Bolton earlier went so far as to threaten to prosecute judges from the court in The Hague if they take up accusations against US forces in Afghanistan.

“We will never surrender America’s sovereignty to an unelected, unaccountable global bureaucracy. America is governed by Americans,” Trump said.

Amid a growing trade war with China, Trump said that the commercial imbalance with the Asian power “cannot be tolerated” and reserved harsh words for OPEC, the global oil cartel that includes both US allies and foes.

“OPEC and OPEC nations are, as usual, ripping off the rest of the world, and I don’t like it. Nobody should like it.” – Rappler.com