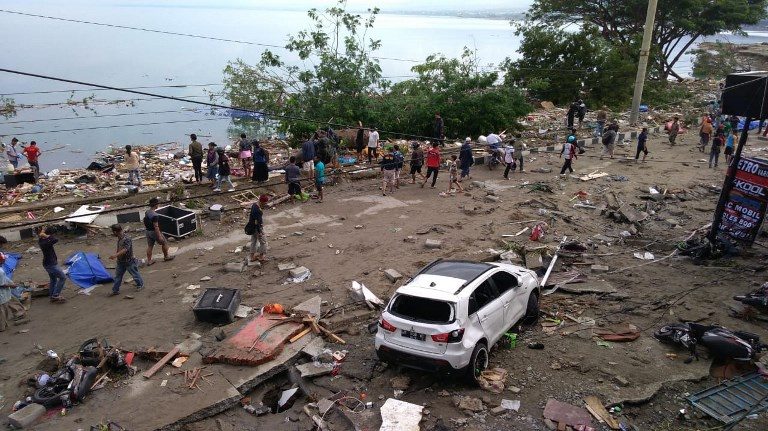 Facebook Twitter Copy URL
Copied
(6th UPDATE) The national disaster agency puts the official death toll so far at 384, all of them in the tsunami-struck city of Palu, but warns the toll is likely to rise

PALU, Indonesia (6th UPDATE) – Nearly 400 people were killed when a powerful quake sent a tsunami barrelling into the Indonesian island of Sulawesi, officials said on Saturday, September 29, as hospitals struggled to cope with hundreds of injured and rescuers scrambled to reach the stricken region.

The national disaster agency put the official death toll so far at 384, all of them in the tsunami-struck city of Palu, but warned the toll was likely to rise.

Some 540 people were badly injured, it added.

In the city – home to around 350,000 people – partially covered bodies lay on the ground near the shore, the day after tsunami waves 1.5 meters (5 feet) came ashore.

There were also concerns over the whereabouts of hundreds of people preparing for a beach festival that had been due to start Friday evening, the disaster agency said.

Hospitals were overwhelmed by the influx of injured, with many people being treated in the open air, while other survivors helped to retrieve the remains of those who died.

One man was seen carrying the muddy corpse of a small child.

The tsunami was triggered by a strong quake that brought down buildings and sent locals fleeing for higher ground as a churning wall of water crashed into Palu, where there were widespread power blackouts.

Dramatic video footage captured from the top floor of a parking ramp in Palu, nearly 80 kilometers (50 miles) from the quake’s epicenter, showed waves bring down several buildings and inundate a large mosque.

“I just ran when I saw the waves hitting homes on the coastline,” said Palu resident Rusidanto, who like many Indonesians goes by one name.

The shallow 7.5 magnitude tremor was more powerful than a series of quakes that killed hundreds on the Indonesian island of Lombok in July and August.

Indonesian president Joko Widodo said the military was being called in to the disaster-struck region to help search-and-rescue teams get to victims and find bodies.

“This was a terrifying double disaster,” said Jan Gelfand, a Jakarta-based official at the International Federation of Red Cross and Red Crescent Societies.

“The Indonesian Red Cross is racing to help survivors but we don’t know what they’ll find there.”

The massive tremors were felt hundreds of kilometers away and there has been little word about casualties in Donggala, a region north of Palu where at least one person was reported dead in Friday’s quakes.

“We have heard nothing from Donggala and this is extremely worrying,” Gelfand said.

“There are more than 300,000 people living there. This is already a tragedy, but it could get much worse.”

The quake hit just off central Sulawesi at a depth of 10 kilometres just before 1100 GMT – early evening in Indonesia (7 pm local time) – the US Geological Survey said. Such shallow quakes tend to be more destructive.

Pictures supplied by the disaster agency showed a badly damaged shopping mall in Palu where at least one floor had collapsed onto the storey below, while other photographs showed major damage to buildings and large cracks across pavements.

Homes and a local hotel was flattened while a landmark city bridge was destroyed.

Video from the scene showed the double-arched, yellow bridge had collapsed with its two metal arches twisted as cars bobbed in the water below.

A key access road had been badly damaged and was blocked by landslides, the disaster agency said.

The main airport in Palu, capital of South Sulawesi province, was shut after the tsunami struck and was expected to stay closed for at least 24 hours, complicating any disaster relief efforts.

Friday’s tremor was also felt in the far south of the island in its largest city Makassar and on neighboring Kalimantan, Indonesia’s portion of Borneo island.

The initial quake struck as evening prayers were about to begin in the world’s biggest Muslim majority country on the holiest day of the week, when mosques are especially busy.

Indonesia is one of the most disaster-prone nations on earth.

Earlier this year, a series of powerful quakes hit Lombok, killing more than 550 people on the holiday island and neighbouring Sumbawa.

Indonesia has been hit by a string of other deadly quakes including a devastating 9.1 magnitude tremor that struck off the coast of Sumatra in December 2004.

That Boxing Day quake triggered a tsunami that killed 220,000 throughout the region, including 168,000 in Indonesia.

In 2010, about 430 were killed when a huge quake sparked a tsunami off the coast of Sumatra, while more than 600 were killed in a quake-tsunami disaster on Java island. – Rappler.com