Sep 29, 2018 10:14 PM PHT
Agence France-Presse
Facebook Twitter Copy URL
Copied
At least 193 Palestinians have been killed by Israeli fire since March 30, the majority during Israel-Gaza border protests, while one Israeli soldier has been shot dead by a Palestinian sniper 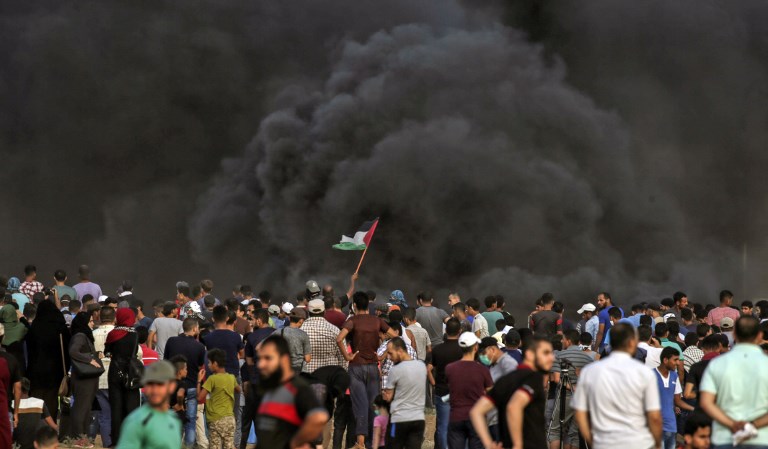 JERUSALEM – The UN called on Saturday, September 29, for Israel and Hamas rulers to rein in violence a day after border clashes in which the Gaza health ministry said 7 Palestinians were killed.

“I am deeply saddened by reports that 7 Palestinians, including two children, were killed, and hundreds of others injured, by Israeli forces during demonstrations in the Gaza Strip yesterday (Friday),” the UN’s humanitarian coordinator for the Palestinian territories, Jamie McGoldrick, said in a statement.

“I call on Israel, Hamas, and all other actors with the ability to influence the situation, to take action now to prevent further deterioration and loss of life.”

Two boys aged 12 and 14, were among those killed in the clashes Friday, the bloodiest day of border protests since May 14, when more than 60 Palestinians died in violence accompanying the inauguration of the US embassy in Jerusalem, a move that enraged Palestinians.

The Israeli army said in a statement Saturday that some 20,000 “rioters and demonstrators” had gathered at multiple sites along the Gaza-Israel border and that people had hurled “over 100” grenades and explosive devices at troops and the at the border fence.

“Hamas is responsible for the violent riots and their consequences,” it said.

It declined to comment directly on Friday’s reported deaths.

Palestinians have been protesting almost weekly along the Gaza border since March 30 in what they call the “Great March of Return.”

At least 193 Palestinians have been killed by Israeli fire since then, the majority during border protests, while one Israeli soldier has been shot dead by a Palestinian sniper.

“I call on Israeli forces to ensure that their use of force is in line with their obligations under international law,” McGoldrick said.

“All actors must ensure that children never be the target of violence and neither be put at risk of violence, nor encouraged to participate in violence.”

In Saturday’s statement, the Israeli army said Hamas was “endangering children by sending them to the security fence as a cover for terror activity.” – Rappler.com