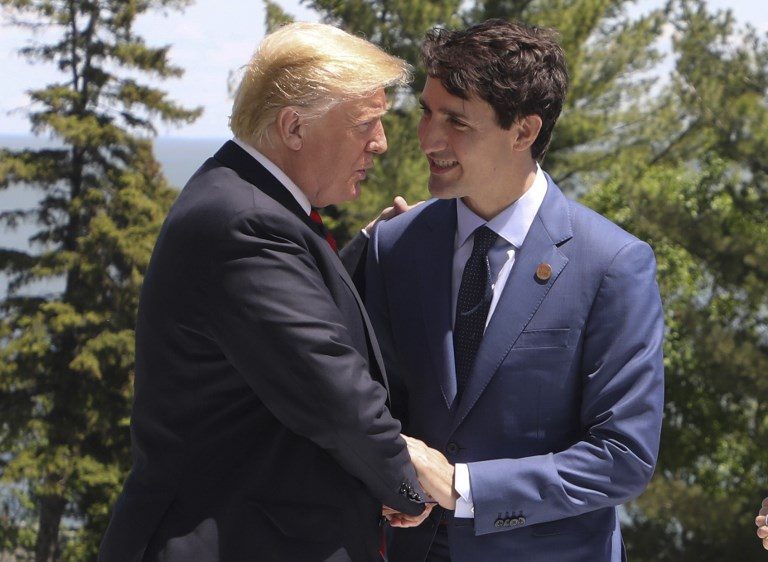 Facebook Twitter Copy URL
Copied
(UPDATED) Reports of a deal cause a jump in the Canadian dollar on early Asian trading with the loonie up 0.7% from its Friday close at $1.2814

CTV cited a high-level American source as saying the two sides had reached an agreement and that a joint statement was expected.

Another Canadian channel, CBC, said a “senior source” confirmed that a deal had been reached on significant sections of a new NAFTA.

Word of an agreement followed an emergency cabinet meeting called by Canadian Prime Minister Justin Trudeau at 10:00 pm (0200 GMT) – two hours ahead of a Washington-imposed midnight deadline for getting the text of a revised agreement to the United States Congress.

Reports of a deal caused a jump in the Canadian dollar on early Asian trading with the loonie up 0.7% from its Friday close at $1.2814.

Talks between the US, Canada and Mexico began last August after Trump called it “one of the worst trade deals in history.”

Earlier Sunday, David MacNaughton, Canada’s ambassador to the United States, had said there was “lots of progress, but we’re not there yet,” before heading back to Washington from Ottawa.

Peter Navarro, an adviser to Trump on trade, told Fox News: “Everybody is negotiating in good faith right now as we speak.

“The deadline is midnight tonight to get the text into Congress to make sure this goes forward.”

Canada’s The Globe and Mail cited four sources as saying an outline of a deal had been reached but Trump and Trudeau still needed to approve it. The two sides were hoping to finalize the pact overnight ahead of an announcement on Monday, The Globe and Mail said.

The United States and Mexico want to push a deal they separately negotiated through their respective legislatures before Mexican President-elect Andres Manuel Lopez Obrador takes office on December 1.

In the United States, Congress needed the text of the deal by the late-Sunday deadline if a 60-day review period is to be respected.

Trump has been pushing for a complete overhaul of the agreement which he says has been a “rip-off” for the United States.

Speaking at a political rally in Wheeling, West Virginia on Saturday night, Trump told supporters: “We’ll see what happens with Canada, if they come along. They have to be fair.”

In August – more than a year into the negotiations – the United States and Mexico announced they had reached a two-way deal, after breaking away for bilateral talks on their outstanding issues.

But the ensuing talks to incorporate Canada stumbled.

Ottawa and Washington remained at odds over Canada’s subsidized dairy sector, and the dispute resolution provisions in NAFTA.

Concessions on dairy would be politically difficult for Trudeau’s government, a matter complicated yet further by elections being held Monday in the dairy producing province of Quebec.

The main Quebec parties and farmers’ organizations are in favor of retaining the “supply management” system, which controls the production and price of milk and poultry and ensures stable incomes for Canadian farmers.

Tempers flared this week on both sides as the end-of-month deadline approached.

“We’re not getting along with their negotiators,” Trump said Wednesday of Canada.

Trudeau fired back: “We won’t sign a bad deal for Canada.”

The political stakes are high on both sides of the US-Canadian border: Trump needs to look strong heading into the November midterm elections, where his Republican Party is fighting to keep control of Congress, while Trudeau does not want to be seen as caving before next year’s general election.

More than two-thirds of Canadian exports go to the United States, equivalent to 20 percent of its Gross Domestic Product, while Canada is the largest export market for the United States. – Rappler.com