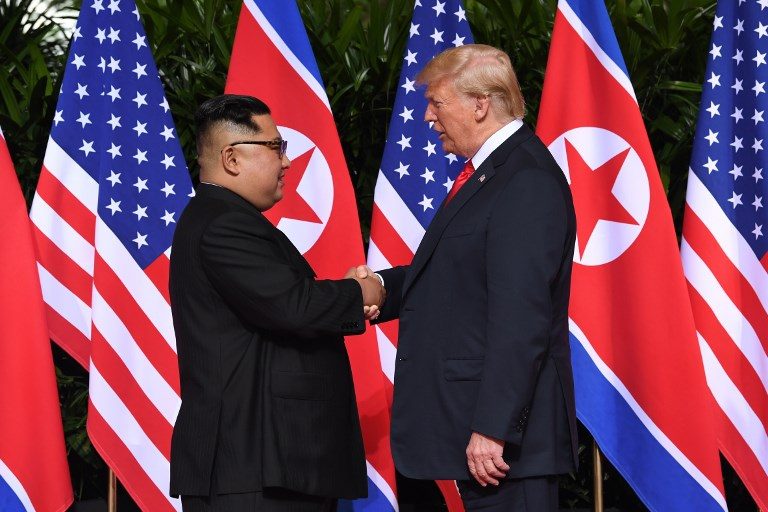 Facebook Twitter Copy URL
Copied
State news agency KCNA says in a commentary that some US experts have suggested trading the end of the war for denuclearization.

SEOUL, South Korea – North Korea on Tuesday, October 2, ruled out dismantling its nuclear arsenal in exchange for the US declaring an end to the Korean War, saying a peace treaty should “never be a bargaining chip.”

The North has for decades demanded that the US formally declare the end of the 1950-53 conflict that was halted only with an armistice, saying an official end to the war would ease tensions on the flashpoint peninsula.

At a summit with the South’s President Moon Jae-in last month, the North’s leader Kim Jong-un  offered to shut down its main Yongbyon nuclear complex if Washington takes “corresponding measures”.

Kim did not elaborate on what those measure might be, but state news agency KCNA said in a commentary that some US experts have suggested trading the end of the war for denuclearization.

It flatly described that as only the “most basic… process” to restore ties, not a point for negotiation.

“The end of war… is not just a gift from a man to another at all. Furthermore, it can never be a bargaining chip for getting the DPRK denuclearized,” it said, using the North’s full name.

KCNA said that Pyongyang was willing to take “such… steps as eternal dismantlement” of its nuclear complex “if the US takes a corresponding measure” but again did not elaborate.

Cho Sung-ryul, analyst at the Institute of National Security Strategy, said the commentary may be aimed at limiting Washington’s room for maneuver.

“The North is trying to reduce the negotiating value of Washington’s potential offer of a peace treaty, by suggesting that ‘it’s not good enough to make us denuclearize’,” he told South Korea’s news agency Yonhap.

A landmark summit between Kim and US President Donald Trump in June led to a warming of ties, but there has been little concrete progress toward denuclearization.

The North’s foreign minister Ri Yong-ho also told the UN last month that there was “no way” his country would disarm first as long as the US pushes for tough enforcement of sanctions against Pyongyang.

Trump however lauded Kim, saying last week the pair had fallen “in love” – their bromance fueled by “beautiful letters” he recently received from the young leader.

The ceasefire that halted the bloody conflict that sealed the division of the Korean peninsula was signed by the North, its military ally China and the US – which fought on the side of the South.

The South did not take part as its then-leader refused to end the war unless the whole peninsula was unified. – Rappler.com