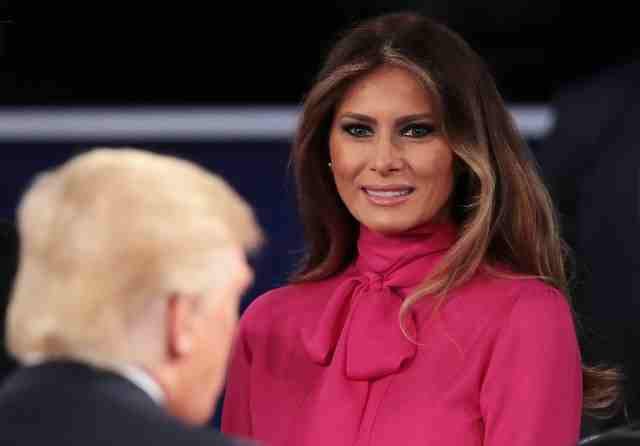 Facebook Twitter Copy URL
Copied
The US First Lady attempts to step out of her husband's shadow, this Africa trip has been seen as an attempt for her to carve her own diplomatic path

A relaxed-looking Trump smiled and waved as she stepped off an overnight flight from Washington to be met on the red carpet by her Ghanaian counterpart Rebecca Akufo-Addo.

She beamed as she was welcomed by a troupe of traditional drummers and dancers. “Thank you very much,” she said with a smile.

The former model, whose choice of clothing is keenly watched, changed from a safari-inspired departure outfit of suede trench coat and leopard print heels to a red and white striped dress with white pumps by the time she arrived in West Africa.

She is scheduled to visit a hospital in Accra to learn about newborn health and also have tea with Mrs Akufo-Addo at the presidential residence, Jubilee House.

The 48-year-old is promoting her Be Best initiative, her official agenda unveiled in May designed to improve children’s well-being.

Her office said it will also “showcase” the work of the US Agency for International Development (USAID), even at a time when her husband’s government is looking to slash US aid across the world.

But unlike her predecessors, her visit will be followed closely to see if she can build bridges after the president reportedly dismissed Africa as a collection of “shithole countries”.

In addition to Ghana, she is due to visit Malawi, Kenya and Egypt before returning to Washington early on October 7.

The enigmatic US first lady has typically stayed out of the spotlight since her husband became president yet she has made headlines for rare public appearances.

In June, she made a surprise visit to Texas to visit detained children at the Mexican border, wearing a jacket emblazoned with the words “I really don’t care. Do U?”

No one knew who the message was intended for, leaving it – and her – up for interpretation.

This ambiguity has led some pundits to describe her as a “Rorschach test in Louboutins” after the interpretative ink blots used in psychoanalysis and the luxury shoes.

But as Melania Trump attempts to step out of her husband’s shadow, this trip has been seen as an attempt for her to carve her own diplomatic path.

She has previously travelled alone to Canada and joined her husband on several foreign visits.

Spokeswoman Stephanie Grisham said the Africa tour is close to her heart. “This is her trip, her initiative,” she said.

That hasn’t stopped Donald Trump from weighing in last week, when he told journalists that his wife was “making a big trip to Africa”.

“We both love Africa. Africa is so beautiful, the most beautiful part of the world, in many ways,” he added.

The US president has yet to travel to Africa since taking office.

Melania Trump’s visit to Ghana will inevitably draw comparisons to when former president Barack Obama and his wife Michelle visited Ghana in 2009.

He also toured the Cape Coast Castle, a former slavery outpost, with his family.

Ghana is seen as a haven of stability in an often turbulent region but despite the interest back home, the first lady’s visit did not appear to have generated similar fervor locally.

Unlike the Obamas’ visit, the roads from the airport were not packed with onlookers while there was little fanfare in the local media, according to an AFP reporter on the ground. – Rappler.com