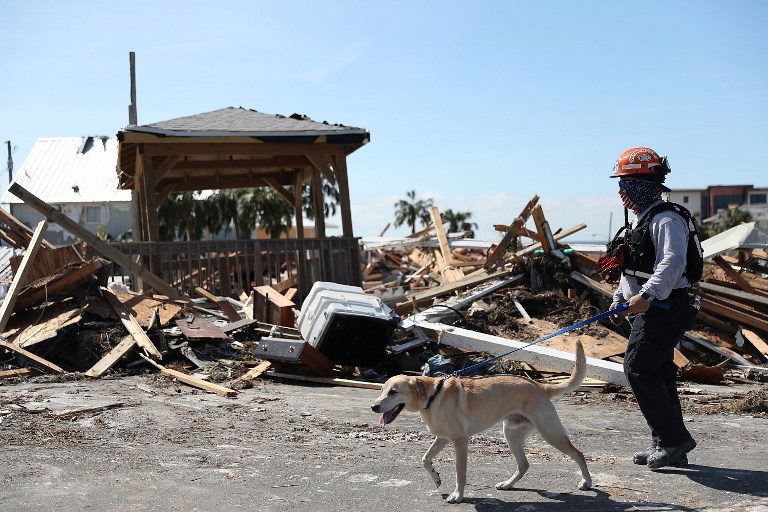 PANAMA CITY, USA – Search and rescue teams on Friday, October 12, faced a second day of sifting through the ruined landscape left by furious Hurricane Michael as it devastated coastal communities in the Florida Panhandle.

With the death toll at 6, Michael, now a tropical storm, sped east over Virginia and was close to reaching the Atlantic.

It left a stunning swathe of destruction behind.

In Mexico Beach, a seafront town where the hurricane made landfall, houses had been razed by a storm surge, boats had been tossed into yards and the streets were littered with trees and power lines.

Florida Governor Rick Scott said the storm had caused “unbelievable devastation” and the priority for the moment was looking for survivors among residents who failed to heed orders to evacuate.

“I’m very concerned about our citizens that didn’t evacuate and I just hope that, you know, we don’t have much loss of life,” Scott told ABC.

The US Army said more than 2,000 Florida National Guard soldiers were working on the recovery operations.

There have been 6 confirmed storm-related deaths so far – 4 in Florida’s Gadsden County, one in Georgia, and one in North Carolina.

“Our hearts are with the thousands who have sustained property damage, in many cases entirely wiped out,” Trump said. “We will not rest or waver until the job is done and the recovery is complete.”

Florida officials said more than 400,000 homes and businesses were without electricity in Florida and Governor Scott said nearly 20,000 utility workers had been deployed to restore power.

Michael made landfall on Wednesday afternoon, October 10, as a Category 4 storm, the most powerful to hit Florida’s northwestern Panhandle in more than a century.

Michael has since been downgraded to a tropical storm as it moves through the Carolinas, which are still recovering from last month’s Hurricane Florence.

Mexico Beach, where the hurricane came ashore, suffered massive destruction from the 155 mile per hour (250 kph) winds and several feet of storm surge.

Home after home was razed from its foundations in the town of around 1,000 people, leaving just bare concrete slabs. Others were missing roofs or walls. Roads were impassable and canals were choked with debris.

A Mexico Beach resident who rode out the hurricane described the impact of the storm surge to CNN.

“When the water came in houses started floating,” said the man identified as Scott. “We had furniture in our house that wasn’t even our furniture. The surge had brought stuff in.

“There’s nothing left here anymore,” he said of the town. “Our lives are gone here. All the stores, all the restaurants, everything.

“It’s hard to grasp,” he said. “This was never in our imagination.”

Nearby Panama City Beach experienced similar damage along with other communities along the shore of the Gulf of Mexico.

A storage facility in Panama City Beach housing hundreds of boats was ripped apart by the strong winds with the roof shredding into strips of twisted metal.

Margaret Decambre, a 48-year-old gemologist, rode out the storm in her Panama City fourth-floor condo with her husband and 3 cats.

“The wind was so hard that it was pushing water through windows and doors,” Decambre said. “We had probably about half an inch of water on my floor and no way to stop it from coming in.

“It’s total devastation – no power, no water, no communication,” she said.

Decambre said she had opened her home to a friend who takes care of 3 elderly women.

“We brought all 4 of them and their cat to my condo,” she said. “Yes, it is all about helping others.”

At 2:00 am (0600 GMT), Michael was over Virginia and about to move away from the US coast, speeding toward the open Atlantic at 25 mph, the National Hurricane Center said.

It warned of damaging winds and possible flash flooding in North Carolina and states just to the north and said the storm was still packing winds of 60 mph.

Long said many Florida buildings were not built to withstand a storm above the strength of a Category 3 hurricane on the 5-level Saffir-Simpson Hurricane Wind Scale.

As it came ashore, Michael was just shy of a Category 5 – defined as a storm packing top sustained wind speeds of 157 mph or above. – Rappler.com