Brexit: What happens next?

Oct 20, 2018 2:30 AM PHT
Agence France-Presse
Facebook Twitter Copy URL
Copied
Britain is due to leave EU on March 29, 2019, but as of today there is still no Brexit deal. Here's an outline of what could happen next. 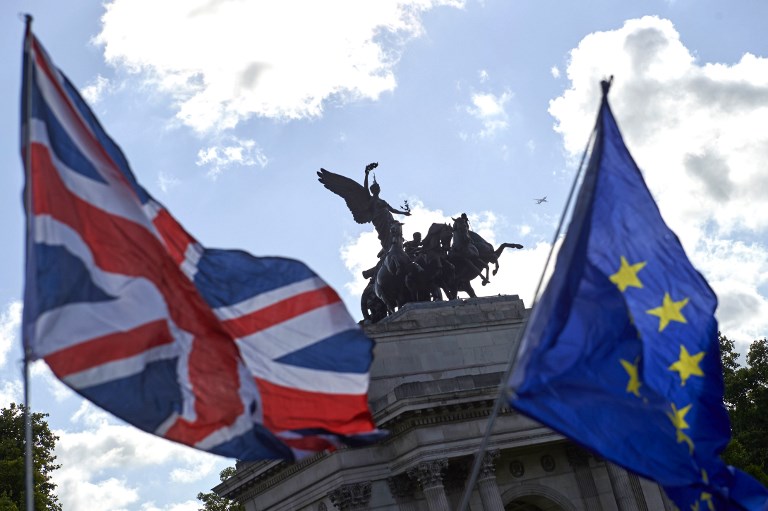 BRUSSELS, Belgium – A European Union summit this week broke up with little progress towards a Brexit deal, just months before Britain is due to leave the bloc on March 29, 2019.

EU leaders agreed to keep talking but refused to confirm a special meeting in November to seal the agreement, pushing any possible deal back to a December summit.

Before that, British Prime Minister Theresa May must win a parliamentary vote on her government’s budget on November 1, a test of her ability to get the final Brexit deal approved.

Here is an outline of what could happen next:

May’s Conservative government depends on its majority in the House of Commons on the 10 MPs from Northern Ireland’s Democratic Unionist Party.

The DUP has threatened to vote against the budget if May agrees a Brexit deal with the EU that threatens the status of Northern Ireland in the United Kingdom.

Media reports suggest some hardline euroskeptic Conservative MPs, who believe May has already conceded too much to Brussels, could also use the budget vote as a show of strength.

Losing the budget vote could spark a challenge against May from inside her Conservative party.

The support of 48 MPs – 15 percent of the parliamentary party – is needed to trigger a vote of confidence.

Her critics have the numbers to do this but say they have held off so far because they believe she would survive.

May needs a simple majority to win any such vote.

If May loses, there would be a leadership contest with the winner becoming prime minister, without the need for new elections.

In the past, budget votes have been viewed as votes of confidence in the British government and losing one would trigger a new election.

A 2011 law changed this, setting a program of elections every five years except in two specific circumstances.

Either two-thirds of MPs back a new election, or they pass a motion of no confidence in the government and fail to agree an alternative within a fortnight.

If the prime minister survives the November 1 vote she will press on with Brexit negotiations.

Agreement at a formal December summit is viewed by all sides as the final deadline, to leave enough time for its ratification by the British and European parliaments before Brexit day.

It will become clear then if there is no deal.

Will British MPs accept it?

If there is a Brexit deal with the EU, it will be presented to the 650 MPs in the House of Commons for their approval.

May’s Conservatives have 315 MPs and with the support of the DUP’s 10 lawmakers could get the deal through.

But if the DUP or her hardline eurosceptics fail to support her, she must turn to the opposition Labour party.

Labour, which has 257 MPs, has warned it will probably oppose the deal but some MPs have indicated they would defy their party to avoid a damaging no-deal Brexit.

Failure to reach any agreement on Britain’s exit could see legal, security and economic ties with the EU severed overnight, leaving planes grounded, expatriates left with no rights and goods stuck at borders.

If the December summit breaks up without an agreement, there could still be some mini-deals in areas such as aviation to avert a potential catastrophe.

If British MPs reject the plan, they might demand the government try to negotiate a new deal, but that would require more time.

London is set to leave the EU on March 29, 2019, although the bloc’s leaders could agree to delay this.

The question is, with the Conservatives and Labour divided over Brexit, whether there is a majority in the House of Commons for any other withdrawal plan.

Failure to agree a deal at any stage is also likely to spark a leadership challenge against May, which in turn could see new elections.

There are growing calls in Britain for a referendum on the Brexit deal, possibly with an option of staying in the EU.

But a majority of MPs must agree and May’s government is opposed, although Labour has refused to rule it out. – Rappler.com