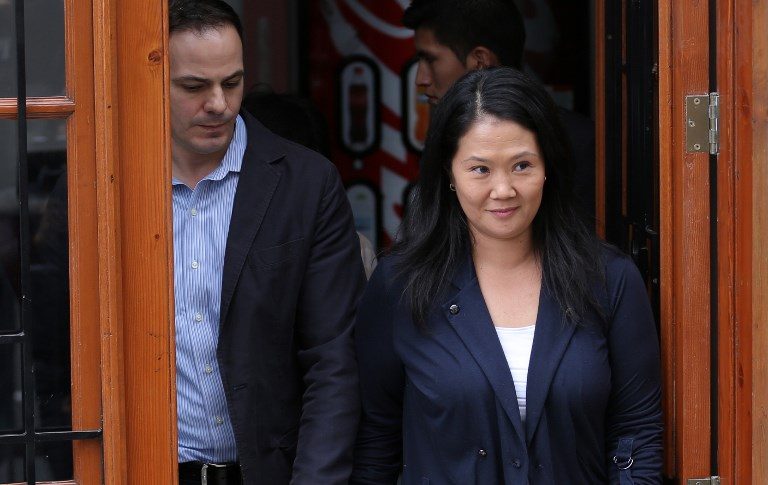 Facebook Twitter Copy URL
Copied
Sunday's hearing is adjourned by Judge Richard Concepcion Carhuancho after defense lawyers said the prosecution had failed to hand over requested documents, and would need more time to make their case

LIMA, Peru – A Peruvian court postponed on Sunday, October 21, a ruling on a prosecutor’s demand to put opposition leader Keiko Fujimori in preventive detention for 36 months, which she called a conspiracy to “bury” her presidential hopes.

Anti-corruption prosecutor Jose Domingo Perez had asked the court to hold Fujimori and 11 others for the lengthy period as his team investigates who benefited from millions of dollars in campaign bribes from Brazilian construction giant Odebrecht.

However, Sunday’s hearing was adjourned by Judge Richard Concepcion Carhuancho after defense lawyers said the prosecution had failed to hand over requested documents, and would need more time to make their case.

The judge said he would give “24 hours to the prosecution to comply with the request” and then call a new hearing.

Fujimori, leader of the opposition Popular Force party, left the courthouse smiling and waving to photographers beside her husband, Mark Vito.

The judge rejected her lawyer’s demand that he recuse himself so the case could be transferred to another court.

He is the same judge that earlier this month allowed Lopez’s request to hold Fujimori in preventive detention for 10 days.

Case an effort ‘to bury me’

Fujimori said the prosecutor and the judge were conspiring against her. Both have gained notoriety in Peru for a string of anti-corruption prosecutions against top politicians.

“I feel there is a conspiracy between prosecutor Perez, representing the Prosecutor’s Office, and Judge Concepcion Carhuancho,” she told the Peru21 newspaper.

“Every minute, there is fake news, a lie about our party and my person.

“They are trying to get me out of politics, bury me,” she said.

The 43-year-old daughter and political heir to disgraced ex-president Alberto Fujimori, Keiko has increasingly come under the spotlight as prosecutors investigate millions of dollars in illicit campaign contributions to several former presidents.

Peru’s constitution allows for suspects to be held without trial for up to 36 months in complex cases such as the Odebrecht investigation, which involves tracing millions of dollars in illicit payments.

It also ensures that suspects cannot interfere with evidence or witnesses in an ongoing investigation.

Acceding to the prosecutor’s request would all but end Fujimori’s 2021 presidential chances, after she lost runoffs in 2011 and 2016. – Rappler.com