EU prize awarded to Ukraine’s Sentsov in slap to Russia 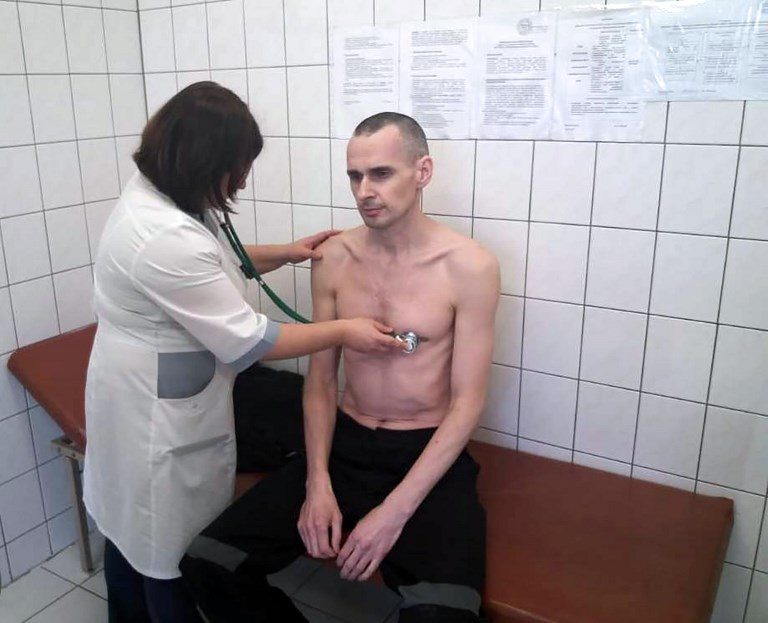 STRASBOURG, France – The European Parliament on Thursday, October 25,  awarded the Sakharov human rights prize to Ukrainian Oleg Sentsov and called for Russia to free the filmmaker, jailed after opposing the annexation of his native Crimea.

In bestowing the honor, the European Union’s elected assembly took Russian President Vladimir Putin again to task over what it sees as his illegal occupation of Ukraine.

“Through his courage and determination, by putting his life in danger, the filmmaker Oleg Sentsov has become a symbol of the struggle for the release of political prisoners held in Russia and around the world,” Tajani said.

“The European Parliament is expressing its solidarity with him and his cause,” the Italian politician told the assembly in Strasbourg, France. “We ask that he be released immediately.”

Sentsov, 42, is serving a 20-year sentence in a Russian penal colony north of the Arctic Circle based on his 2015 conviction for an arson plot in Crimea.

Russia annexed the Ukrainian territory in 2014, triggering European and US sanctions.

Ukrainian President Petro Poroshenko hailed the decision to give the award to Sentsov.

“I am sure that this decision of the European Parliament will bring nearer the release of Oleg Sentsov,” he said on Facebook.

Sentsov started a hunger strike on May 14 demanding the release of all Ukrainian prisoners in Russia, and his deteriorating health provoked an outcry from the international community.

Sentsov called off the protest after 145 days to avoid being force-fed.

Sentsov’s cousin Natalya Kaplan, who lives in the Ukrainian capital Kiev, said she hopes the prize will raise his morale when he finally hears about it.

“I hope (this) will help Oleg to further stay strong and of course I am happy for him. He deserved this,” Kaplan told AFP in written remarks.

She had no news of his condition but has voiced fear over whether he will survive his ordeal.

Zakharova added: “Practically no one has watched his films.”

Sentsov made his first film “Gamer” in 2011, raising the money for the movie from his job running a gaming center in the Crimean city of Simferopol.

It was shown at the Rotterdam Film Festival in 2012 as well as several other European festivals.

At the time of his arrest in 2014, he was preparing to make a new film, “Nosorog,” or “Rhino” with financing from a German film fund.

Michael Gahler, a member of the European Parliament who pushed for his nomination, said Sentsov has become the “voice of around 70 other innocent individuals perishing in inhumane conditions” in jails scattered around Russia.

“We nominated Oleg Sentsov for his peaceful protest against Russia’s occupation of his native Crimea, and his hunger strike for the release of all Ukrainian political prisoners imprisoned by Russia,” Gahler said.

The prize shows “we are bearing testimony to the fact that they are not forgotten,” Gahler said.

The Sakharov Prize, set up in 1988 and named after Soviet dissident Andrei Sakharov, is awarded every year to individuals or organizations that “have made an important contribution to the fight for human rights or democracy”.

Sentsov was among three finalists for the prize, along with a group of 11 charities rescuing migrants in the Mediterranean, and Nasser Zefzafi, head of a Moroccan protest movement who has been in jail since May 2017. – Rappler.com