Since failing to win a 3rd term as president and being defeated by his erstwhile party secretary Maithripala Sirisena in January 2015, Rajapaksa 72, has attempted to stage a comeback.

His appointment on Friday night as the new premier was as controversial as his decade in power.

Rajapaksa crushed Tamil rebels in a no-holds-barred military campaign to end the country’s long-running civil war in May 2009.

His decisive military action sparked allegations that at least 40,000 minority Tamil civilians were killed by government forces while putting down the 37-year conflict that had claimed at least 100,000 lives.

Despite being cold shouldered by the West, he is a charismatic leader hugely popular among the majority Sinhalese community for crushing the Tamil Tiger rebels who were known for their trade mark suicide bombings.

Rajapaksa’s success in overseeing an end to the war propelled him to a huge election victory and a second term in office in 2010.

Soon after his 2015 defeat, he blamed it on the minority Tamil community which voted overwhelmingly for Maithripala Sirisena who pledged accountability for alleged war-time atrocities by the military.

Ironically, it was Sirisena who made Rajapaksa his prime minister after his surprise sacking of Ranil Wickremesinghe whose United National Party (UNP) helped Sirisena win the 2015 election.

Rajapaksa, a lawyer by profession, also accused India’s external intelligence agency, the Research and Analysis Wing, of being behind his stunning defeat.

Traditional ally India was angry over Rajapaksa allowing Chinese submarines to dock at Colombo during his last year in office as president.

But recently, he appeared to have mended fences with India and met with Prime Minister Narendra Modi in New Delhi last month. 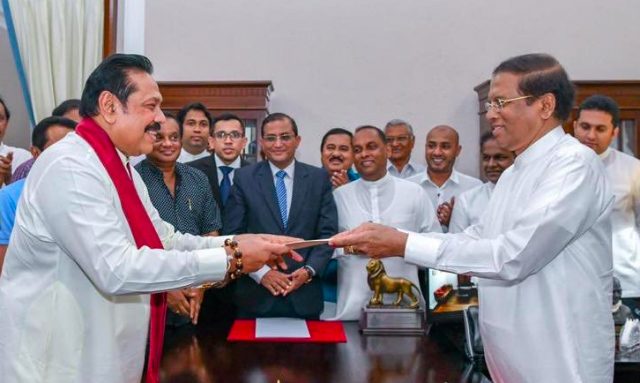 Political commentator Kusal Perera said Rajapaksa remained the most popular Sinhala-Buddhist leader in the country and his dramatic return to power was historic.

“Rajapaksa, as the most charismatic Sinhala Buddhist leader… has made a formidable comeback never known in Sri Lankan electoral history,” Perera said.

Critics say Rajapaksa lost elections in January and August 2015 because of nepotism and failure to deal with huge corruption under his rule.

He oversaw a period of growing prosperity with average growth rates of 7.5%, built Sri Lanka’s first expressway and rolled out new highways and railroads.

But his ambitious infrastructure projects ended up as white elephants and left the country facing a mountain of debt, including commercial loans from China.

Unable to service the debt, the government last year leased a Chinese-built deep sea port in the south of the island to a Beijing company for $1.12 billion.

Another loss-making airport built with more than $300 million in Chinese loans is up for privatisation.

The new government launched several investigations into charges Rajapaksa and his family siphoned off billions of dollars, but prosecutions were extremely slow.

His family members are facing criminal prosecutions but Rajapaksa has defended them, claiming a political vendetta.

A veteran street-fighter politician who entered parliament aged 24, he had no qualms about falling out with the West – even when some world leaders boycotted a Commonwealth summit that he hosted in November 2013 over his rights record.

When the United States and the European Union cut off aid, Rajapaksa leaned heavily on China, Iran and Libya as well as other Asian nations for cash and arms to fight the Tamil Tigers during the war.

A strong believer in astrology, Rajapaksa had pledged never to consult a seer after his 2015 defeat but has in fact continued to seek advice from several soothsayers. – Rappler.com