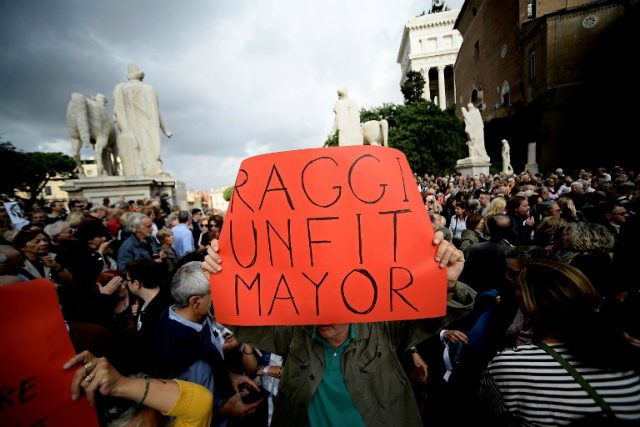 ROME, Italy – Thousands of protesters rallied in the centre of Rome Saturday, October 27, to demand the resignation of its mayor over the Italian capital’s decrepit infrastructure.

The cry “Rome says enough!” has spread in recent weeks on social media, with residents sick of buses that burst into flames, parks left to run wild and abandoned buildings taken over by drug peddlers.

The demonstration was arranged before a horrific accident this week in which more than 20 people, mainly Russian football fans, were injured when an escalator in one of the city’s main metro stations collapsed.

Raggi won the seat in 2016 for the anti-establishment Five Star Movement (M5S) after both the traditional left and right-wing parties were seen to have failed to get to grips with a city drowning in debt.

She has struggled to build a team or take the initiative and her popularity has plummeted.

Raggi is also standing trial on charges she lied about a council appointment, with a verdict in the case expected in November.

Should Raggi be found guilty, she will be expected to stand down – potentially opening up the post of mayor to the far-right.

“We have to send this woman home and find someone whose sole purpose is not to smile for photographers,” said 75-year-old protester Cecilia Todeschini.

She was holding a sign saying: “Rats, mosquitoes and Rome’s boars thank her. The citizens don’t!”

Student Giancarlo, 23, said he was “glad so many people came” to protest, adding: “We can’t stand this inertia any longer”. – Rappler.com