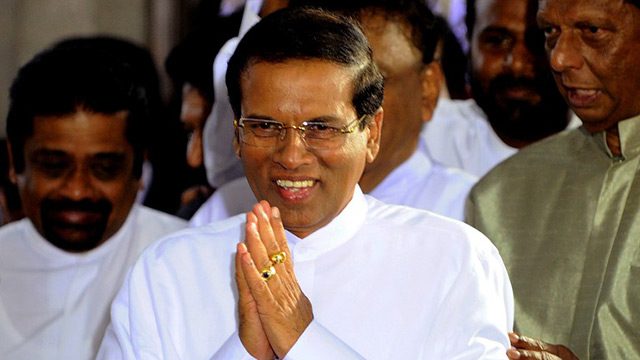 The climbdown Thursday, November 1, by Sirisena, who sparked the crisis by sacking Ranil Wickremesinghe as prime minister and naming former strongman leader Mahinda Rajapakse in his place, would allow a vote to see which of the two has majority backing among deputies.

“The people’s voices have been heard,” Wickremesinghe said in a Twitter statement announcing Monday’s meeting. “Democracy will prevail,” he added.

Sirisena had suspended parliament until November 16 in the hours after the sacking last Friday, October 26, deepening the crisis which led the parliament speaker to warn of a “bloodbath” unless a vote is held. One activist has already been killed in fallout from the tensions.

The speaker Karu Jayasuriya met with Sirisena late Wednesday, October 31, to force the concession, an official involved in the process told Agence France-Presse.

The crisis had put the whole country on edge and threatened to polarize voters.

Sirisena insists his actions were legal but Jayasuriya, who holds the third most powerful state post, refused to defend his maneuverings. Attorney General Jayantha Jayasuriya had also cast doubt on the legality of Sirisena’s moves, increasing pressure on the president.

Leaders of the various political parties will have to hold talks to decide an agenda for Monday’s meeting and no time has been set for that encounter, officials said.

Wickremesinghe remained bunkered in the prime minister’s official residence in Colombo with hundreds of his followers camped outside.

He has repeatedly demanded that the legislature be recalled for him to prove his majority in the 225-member assembly. International calls for a parliament meeting have also been made by the United States and other nations.

Rajapakse, whose decade as president up to 2015 became known for corruption allegations and the brutal ending of the Tamil civil war, is working out of a separate building that is officially the prime minister’s offices.

The 72-year-old has named a small ministerial team of 12 and addressed bureaucrats at the finance ministry on Wednesday. He promised to expand his cabinet to 30 members.

The two rivals are also jockeying for power behind the scenes, battling to tempt lawmakers from opposing sides to bolster their numbers if a vote is held on Monday.

Rajapakse has given 5 legislators from Wickremesinghe’s party ministerial portfolios in his cabinet after they defected.

Wickremesinghe has convinced at least two lawmakers from Sirisena’s camp to join his United National Party.

According to the latest counts, Wickremesinghe has 104 MPs in the 225-seat chamber while Rajapakse and Sirisena together have 99. A majority of the 22 remaining MPs are expected to back Wickremesinghe, observers said.

Even if this crisis is patched up, observers are worried about how the country will go into a presidential election scheduled for next year and legislative polls in 2020.

“The struggle for power jeopardizes progress on reforms, ethnic reconciliation, and prospects for peaceful and fair elections in 2019,” said the International Crisis Group think tank which has called on the United States, European Union and other key nations to put more pressure on Sirisena to end the battle.

“They should back these calls by making clear that Rajapaksa’s appointment, if it stands, threatens the future of security and economic cooperation.” – Rappler.com