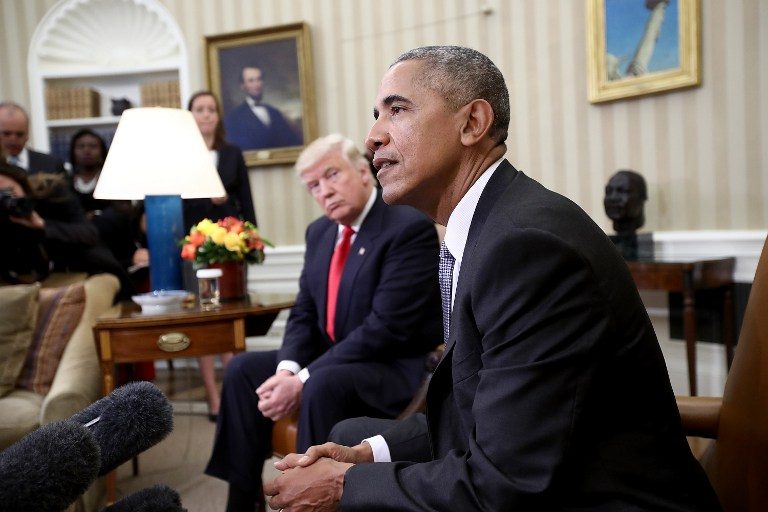 BELGRADE, United States – After boasting about the economy and raising fears over immigration, United States (US) President Donald Trump is facing pushback from his predecessor Barack Obama, who is taking on an increasingly prominent role in the final weekend of campaigning before midterm elections in which Republican control of Congress is threatened.

With rallies taking place in Montana and Florida, a state he had already visited on Wednesday, Trump is keeping up his relentless campaign schedule before Tuesday’s ballot, which has become a referendum on his utterly unconventional presidency.

The campaigning comes one week after a gunman, who allegedly hated immigrants and Jews, killed 11 people at a synagogue in Pittsburgh, and after a fanatical Trump supporter was arrested in Florida on charges of mailing homemade bombs to more than a dozen Trump opponents, including Obama.

At a moment of deep national division, with the political temperature soaring, the president’s critics say he has helped create an atmosphere in which the two attackers felt comfortable to carry out their crimes.

Trump says his Republicans are in a good position ahead of the midterm congressional elections, particularly with new employment figures out showing the economy booming.

But polls point to the Democrats capturing at least the House of Representatives, threatening the billionaire president with the specter of an opposition finally able to block policies and dig into his highly opaque personal finances.

In the last stages of the campaign, Trump is dueling with Obama, who returned to the public eye at a Florida rally on Friday.

Obama is set to campaign again Sunday in his hometown of Chicago, as well as in Indiana, where the seat of Democratic Senator Joe Donnelly is in danger.

America at ‘a crossroads’
At a rally on Friday, Trump called America’s first black president “Barack H. Obama,” a reference to Obama’s middle name of Hussein. Before his presidential run, Trump fanned conspiracy theories about the origins of Obama, who was born in Hawaii.

Obama explained his reemergence at a Georgia rally in support of Stacey Abrams, who is seeking to be the first black female governor of any US state.

“I’m here for one simple reason: to ask you to vote,” Obama said. “The consequences of any of us staying home are profound because America is at a crossroads… The character of our country is on the ballot.”

Trump has brought an unprecedented brand of confrontational politics to the White House, and clearly enjoys a fight.

The latest official jobs figures, which showed 250,000 net new positions in October — ahead of forecasts — gave him a golden opportunity to crow over what he almost daily claims to be the world’s “hottest economy.”

But if, on the one hand, the president has been touting the United States as a land of plenty with jobs for all, on the other he has stirred fear and loathing.

Even as illegal immigration has dipped to a quarter of what it was in 2000, Trump claims that the country faces an “invasion” of Central Americans.

He has ordered regular army troops to the US-Mexican border as a caravan of a few thousand impoverished migrants slowly marches toward the boundary. They are currently marching toward Isla, in Mexico’s state of Veracruz.

He has also announced “tent cities” to detain people demanding political asylum, and claimed the power to scrap the right to citizenship for anyone born on US soil — until now considered protected by the US Constitution.

A military spokesman said that more than 7,000 US soldiers will be positioned in states bordering Mexico by the end of the weekend.

Newsweek reported that it had obtained documents which showed intelligence officials did not anticipate high involvement of criminal gangs among the migrants, and that the administration expects only a minority of those in the caravan would actually reach the border.

“These are bad people, there’s some bad hombres in that group,” Trump told the Montana rally.

Obama decried Trump’s troop deployment as a “political stunt” serving to “get folks angry and ginned up.”

“There’s just constant fear-mongering to distract from the record,” he added. – Rappler.com