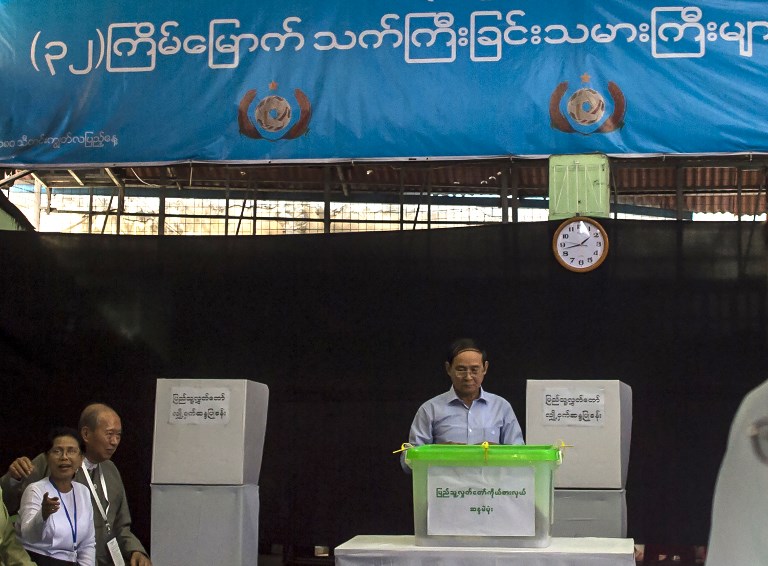 YANGON, Myanmar – The party of Myanmar’s embattled head of state Aung San Suu Kyi said Sunday, November 4, they were defeated in 6 constituencies in a national by-election, showing uneven support for her government after a string of controversies.

Suu Kyi and her National League for Democracy (NLD) swept to power in 2015 in a landslide victory, ending decades of military rule.

But her tenure has been full of stumbles, most notably with ethnic groups involved in peace talks with the military – which has been marred by skirmishes and ongoing civil war in states like Kachin and Shan.

The dissatisfaction came through in the results of Saturday, November 3 by-election, in which 13 seats in the lower and upper houses of parliament and regional assemblies were up for grabs.

Four of the 6 seats were previously held by NLD candidates.

While official tallies have not yet been released by the Union Election Commission, preliminary results show the military-aligned Union Solidarity and Development Party (USDP) had beaten NLD out on 3 seats.

In some constituencies voters went with ethnic political parties, while people in Rakhine state’s Yathedaung township threw their support behind the son of a prominent politician who has in the past capitalized on the ethnic Rakhine Buddhists’ dissatisfaction with Muslim communities.

Dr. Myo Nyunt said the losses of these 6 seats is due to his party’s unpopularity with ethnic minority groups and people working for the government.

“We heard that ethnic groups are not satisfied with our performance regarding the peace process,” he said.

Political analyst Maung Maung Soe told AFP that the low voter turnout in most of these constituencies hurt the NLD’s showing, and voter apathy could really impact them in the next election in 2020 – adding that in comparison, the military-aligned USDP has unwavering support.

“Although NLD supporters are many, they are currently losing supporters from ethnic groups and intellectuals as well as from the media,” he said.

For press freedom advocates, Suu Kyi’s shine has worn off due to the jailing of two Reuters journalists who reported on the killing of 10 Rohingya men by the military.

They were sentenced to 7 years in prison in what has largely been regarded as a sham trial.

Outside of Myanmar, the international community has also soured on the former Nobel Laureate, as her image as a rights icon has been shattered due to her handling of the Rohingya crisis. (READ: Canada strips Aung San Suu Kyi of honorary citizenship)

More than 720,000 people of the stateless Muslim minority group have fled Bangladesh since a military crackdown in August 2017, which UN investigators have alleged amounts to genocide and crimes against humanity.

Myanmar has denied almost all the allegations, justifying the actions of the military as necessary to combat terrorism. – Rappler.com