Nov 6, 2018 1:39 PM PHT
Agence France-Presse
Facebook Twitter Copy URL
Copied
According to estimates, as many as one million Uighurs and other Muslim minorities are being kept in extrajudicial detention in China's fractious far western Xinjiang region 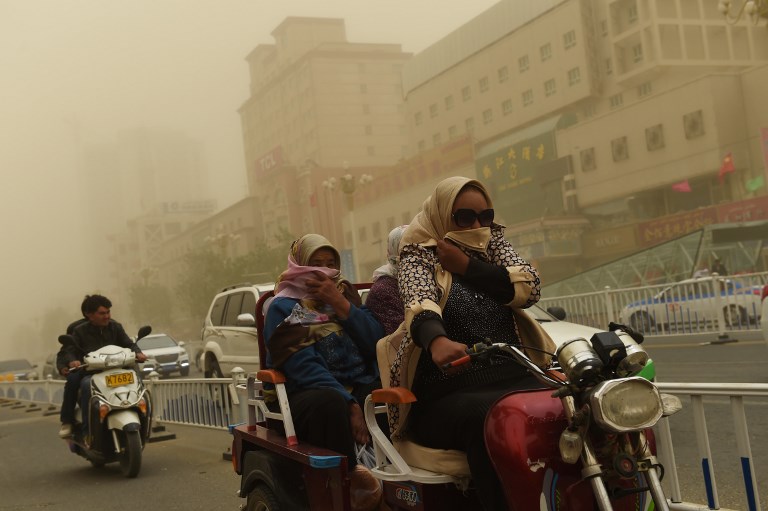 GENEVA, Switzerland – China’s mass detainment of ethnic Uighurs and its crackdown on civil liberties will likely figure high on the agenda Tuesday, November 6, when countries meet at the UN in Geneva to review Beijing’s rights record.

As many as one million Uighurs and other Muslim minorities are being kept in extrajudicial detention in China’s fractious far western Xinjiang region, according to estimates cited recently by an independent UN panel.

The centers where they are thought to be detained have come under increasing scrutiny this year, with rights activists describing them as political re-education camps.

They say members of China’s Muslim minorities are held involuntarily for transgressions such as wearing long beards and face veils.

Countries at the UN Tuesday “must send an unequivocal message to the Chinese government that their campaign of systematic repression in the Xinjiang Autonomous Region, including the arbitrary detention of up to one million people, must end,” Patrick Poon, China researcher at Amnesty International, said in a statement.

The so-called Universal Periodic Review – which all 193 UN countries must undergo approximately every 4 years – will start with China presenting a report on its rights situation and changes made since it was last in the spotlight in 2013.

During the half-day session, diplomats from around the world will have the chance to raise concerns, ask questions and make recommendations for changes.

“All UN member states have an equal opportunity to press China on its egregious human rights record, and they shouldn’t waste it,” Human Rights Watch’s Geneva director John Fisher said in a statement Monday, November 5.

Some countries have already submitted questions in advance, including the United States, which is leading demands for Beijing to come clean on the Uighur crackdown.

“Can China clarify the basis for its apparent criminalization of peaceful religious practices as justification to detain people in these political ‘re-education’ camps in Xinjiang, as well as which officials are responsible for this policy?”

Washington also wants Beijing to provide “the number of people involuntarily held in all detention facilities in Xinjiang during the past 5 years”.

Beyond Xinjiang, China will also come under scrutiny for other aspects of its human rights record, including a dramatic crackdown on civil liberties and religious freedoms since President Xi Jinping took power in 2012.

In 2015, more than 200 Chinese human rights lawyers and activists were detained or questioned in a sweep known as the “709” crackdown.

China’s crackdown on civil society is sometimes felt as far away as Geneva.

In a report published last year, Human Rights Watch accused Beijing of sabotaging UN efforts to promote rights, maintaining that Chinese officials routinely photograph and film activists on UN premises, in violation of UN rules, and bar Chinese activists from travelling to the UN in Geneva.

In the most shocking case, Chinese authorities detained activist Cao Shunli in 2013 as she attempted to travel to Geneva ahead of the last UPR review of China’s rights record.

After being held for several months without charge, she fell gravely ill and died in March 2014.

“Chinese activists have been imprisoned, tortured, and fatally mistreated for the chance to challenge Beijing over its human rights record,” HRW’s Fisher said.

“Governments that don’t seize this opportunity to speak out embolden China, weaken the UN, and demoralize activists struggling across the world to hold Beijing accountable.” – Rappler.com