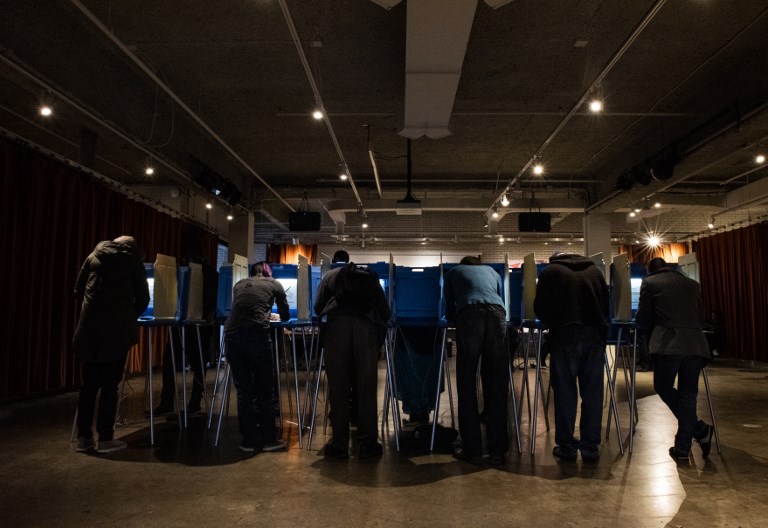 CHICAGO, USA – Andrew Menck didn’t bother to vote in the last 7 congressional elections but, determined to deliver a rebuke to Donald Trump’s presidency, he joined the lines outside his local polling station that built up before dawn.

“I disapprove of the president’s actions,” said the 34-year-old, a Chicago voter who sees his ballot as a chance for real scrutiny of a president who has enjoyed a largely free hand from the Republican-controlled US Congress.

Menck was among millions of Americans heading to the polls Tuesday, November 6, in the first major voter test of Trump’s chaotic, often controversial presidency.

Massive early numbers – more than 38 million ballots have been cast ahead of polling day compared with fewer than 20 million in 2014 – sparked optimism that heavy rain in the eastern United States would not depress turnout.

A suburban Chicago polling station reported twice the number of voters compared to 2016 – a presidential election year – while in downtown Chicago, people gathered before polls opened at 6:00 am (1100 GMT).

“The message that I’m going to send is: We’re not okay with the direction that this president is leading our country,” said Rory Mabin, a 34-year-old Chicago resident who votes in every midterm election.

But James Gerlock, a 27-year-old Republican, said he was happy with the economic growth the country has seen under Trump’s presidency and “just (loves) the deregulation.”

In the Chicago suburb of Downers Grove, at a church along a leafy street, 500 people had voted in the first two hours of the morning – twice as many as two years ago, according to poll worker David Mendalski.

The story was the same in Maryland, where a Montgomery County election official reported that turnout has been “astounding” early on, speculating that it might also surpass participation in presidential elections. 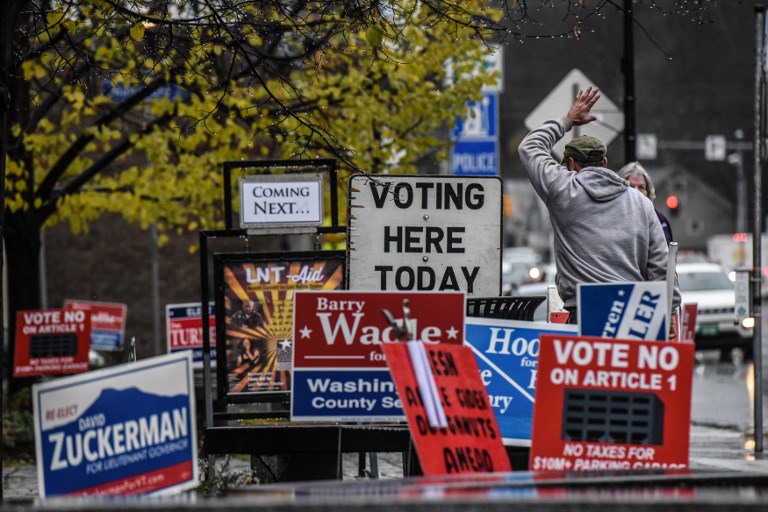 And in Irvine, California, where Democratic candidate Katie Porter is locked in a tight race with two-term Republican incumbent Mimi Walters, a staunch Trump backer, people were out in droves.

“We have already seen huge turnout, people out and about knocking on doors, making sure everybody gets out there, Porter told Agence France-Presse (AFP).

“We’re seeing so much support including from those who may have voted Republican in the past or may be registered Republicans,” she told AFP, saying she expects many of them will flip to the other side this go-around.

But in Orange County – where 4 heated congressional races are underway – voter Richard Leavitt was skeptical that big change was in store.

“Every side believes they are the best and the strongest,” he said. “A lot of people are angry and want change but it doesn’t mean they’ll get it.”

There was a sense of urgency among voters flocking to the Brooklyn Museum in New York City, where production artist Gilad Foss warned that democratic values were “kind of under attack.”

Across the East River in Manhattan, high school senior Ayla Jeddy voted after turning 18 in September – just in time to register.

“I looked up all the candidates last night, and I did vote for candidates who opposed the most egregious of (Trump’s) policies: his immigration policies… and his attitude towards women in general,” she said, proudly displaying an “I voted” sticker on her jacket.

Stacey Abrams, 44, the former minority leader of the state House of Representatives, is running for governor of Georgia against Republican Brian Kemp, the 55-year-old Georgia secretary of state.

Abrams, who has received the support of Oprah Winfrey and other celebrities, would be the first black woman to become governor of a US state if she wins.

“I really wanted to vote for the first female African-American governor, so that was one of the major driving forces, to be honest,” Lia Koski, casting her ballot in Atlanta, told AFP.

One of the most expensive and closely watched Senate races is in Texas, where incumbent Republican Senator Ted Cruz is facing pro-immigration Democratic Representative Beto O’Rourke.

At a polling station in his home town, the border city of El Paso, Carlos Gallinar enthused that O’Rourke was “just great for El Paso, great for Texas, great for United States.”

“With all the issues that are happening across the country and the negative energy coming out of Washington and this president, it’s great to see someone like Beto who has great energy, great enthusiasm, (a) positive great message.” – Rappler.com