Nov 8, 2018 1:56 AM PHT
Agence France-Presse
Facebook Twitter Copy URL
Copied
In his first press conference after the midterm election, the US president also calls on Republicans, Democrats to 'work together' 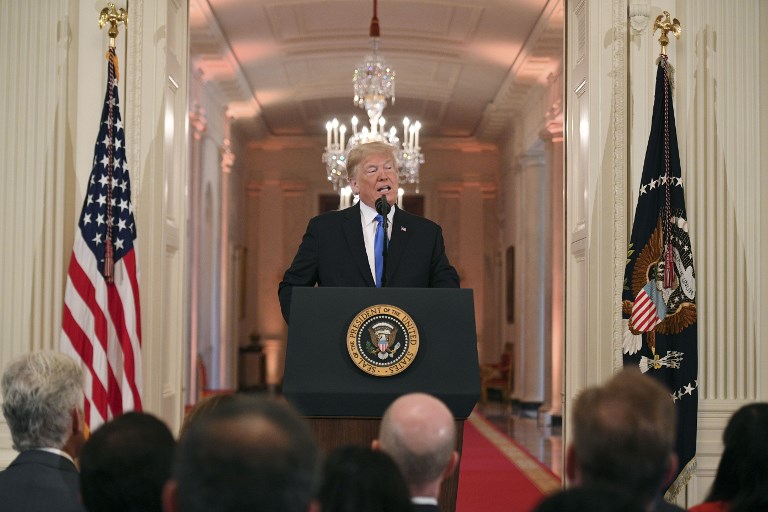 WASHINGTON, USA – US President Donald Trump on Wednesday, November 7, hailed a “big day” for Republicans after his party lost control of the House of Representatives in the US midterm elections but increased their Senate majority.

He offered an olive branch to Democrats, praising their leader and likely next House speaker Nancy Pelosi, but angrily lashed out at journalists for questioning his congressional campaign tactics.

Democrats will have 229 seats in the 435-member House, while Republicans will hold 53 seats in the 100-member Senate, up from 51, according to projections by The New York Times.

“It was a big day yesterday, an incredible day,” Trump told a news conference at the White House.

“And last night… the Republican Party defied history to expand our Senate majority while significantly beating expectations in the House.”

Republican senate candidates were also leading in Arizona and Montana. Democrats appear to have won a Republican Senate seat in Nevada.

Democrats also picked up 7 governorships but fell short in a high-profile race in Florida, expected to play a key role in the 2020 presidential election.

Trump reeled off a shopping list of disadvantages the Republicans had faced going into Tuesday’s vote, including “wealthy donors and special interests,” for the Democrats, and “very hostile media coverage, to put it mildly.”

“We also had a staggering number of House retirements. So it is a little tough,” he added.

“These are seats that could’ve been held pretty easily. And we had newcomers going in. And a lot of them worked very hard. But it is very difficult when you have that many retirements.”

But he called out Republicans who did not accept his offer of campaign help, saying they failed to accept his “embrace.”

‘A lot of credit’

The Republican president said he would “like to see bipartisanship” and offered Pelosi “a lot of credit for what she has done and accomplished.”

He cited health care and infrastructure as areas where the two parties could work together.

“Hopefully we can all work together next year to continue delivering for the American people,” he said.

“I really believe that we will be able to do that. We are going to have a lot of reason to do it.”

With the House victory, Democrats promised aggressive probes of Trump’s administration and his personal finances after winning the House, but the Republican president remained undeterred.

On Wednesday, he said he was “not concerned” about the “hoax” investigation into the Trump presidential campaign’s possible collusion with Russia to influence the poll.

“There’s no collusion,” he said. “I think it’s very bad for our country.”

Democrats will take over committees when the next Congress convenes in January, giving them the power to hold hearings, call witnesses and issue subpoenas to administration officials.

Once Trump opened the floor to questions, he sparred with several reporters, admonishing a handful of them to sit down, including frequent bugbear Jim Acosta of CNN.

He denied using a migrant caravan making its way to the US border through Mexico to whip up fear ahead of Tuesday’s election to win votes. – Rappler.com