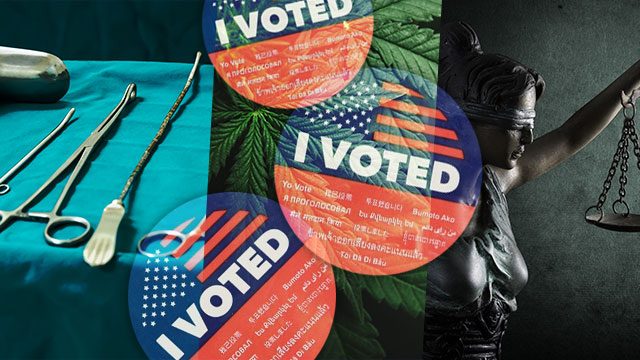 WASHINGTON DC, USA – In addition to choosing members of Congress and state governors, Americans also cast ballots on a slew of local initiatives in the midterm elections, including the legalization of recreational marijuana, limits on abortions and banning greyhound racing.

Michigan became the 10th state to legalize recreational marijuana, and in the future residents will be able to grow up to 12 plants for their own personal use. A 10% tax was imposed on marijuana sales, with the revenue to be used to fund local councils, education and transport.

Missouri and Utah each legalized medical marijuana, which will carry a tax of 4%, with the funds earmarked to support health care for veterans.

The Alabama amendment aimed to “support the sanctity of unborn life and the rights of unborn children, most importantly the right to life in all manners.”

The text of the proposal stated that “this state does not protect the right to abortion or require the funding of abortion.” The state makes no exception for abortions in cases where the pregnancy results from incest, rape or where the mother’s life is in danger.

Women’s rights advocates fear the measures could lead to a challenge to the landmark Roe vs Wade Supreme Court ruling of 1973, especially at a time when appointments by President Donald Trump have swung the court far to the right.

Louisiana scrapped a law dating back to its segregated past that allowed non-unanimous decisions in juries deliberating in felony trials.

The law, from 1898, allowed a jury to convict a person of felony by only 10 out of 12 jury votes, a move designed to negate the influence of black jury members who were allowed by the 14th Amendment after the Civil War to serve on juries. Its stated aim was to “perpetuate the supremacy of the Anglo-Saxon race in Louisiana.”

Oregon is the only other state that does not require a unanimous jury decision in felony cases, except for murder.

Florida pass an initiative to restore voting rights to convicted felons who have served their sentence, except for those convicted of sex crimes or murder.

That will give an estimated 1.5 million people the right to cast ballots in a key swing state in presidential elections.

Alabama voted to allow the display of the biblical Ten Commandments in public buildings and schools.

Nevada backed a measure calling for public electricity providers to increase the amount of power generated from renewable sources from 20% to 50% by 2030.

Under the western state’s regulations, however, the proposal has to be approved again in a second election, in 2020, to become law.

Florida banned offshore drilling in waters belonging to the state and also forbade vaping in the workplace.

In Florida, 69% of voters supported a ban on greyhound racing to come into effect by 2020, backing animal rights activists who denounce the sport as cruel.

Florida has 12 of the United States’ 18 dog tracks, while 40 US states ban betting on greyhound races.

California passed an initiative requiring all eggs in the state to come from cage-free hens by 2022, while setting minimum cage size requirements for pigs and calves raised for veal.

Alaskans however rejected a ballot measure increasing protections for wild salmon and their habitat, that would have tightened the permitting process for oil developments, mines and dams.

San Francisco voters backed a tax on the city’s wealthiest companies to tackle homelessness, passing a measure that divided the tech community.

A tally posted Wednesday, November 7, showed that 60% of voters in the city that is home to Airbnb, Uber, Salesforce, and Twitter cast ballots in favor of “Proposition C,” a local ballot measure brought about by a 28,000 signature petition this summer.

Designed to rake in $250 to $300 million in taxes per year, the Robin Hood-esque measure is intended to fund housing for 5,000 people and finance mental health and housing aid services, according to its backers.