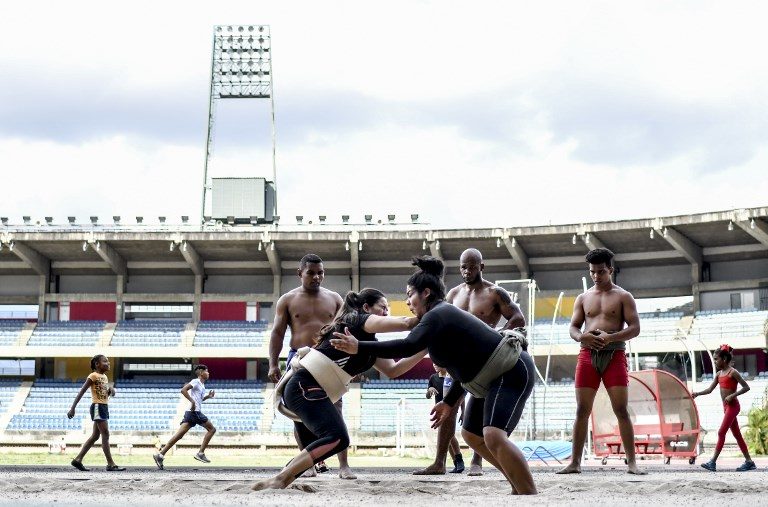 Facebook Twitter Copy URL
Copied
In Venezuela, a sumo wrestler's most fearsome opponent is not the one staring them down from across the dohyo, or ring, but the country's overwhelming economic crisis

CARACAS, Venezuela – Their physique may be a far cry from the celebrated bulk of Japan’s mammoth fighters, but athletes like Walter Rivas are beginning to make a name for themselves – and the noble sport of sumo wrestling – in Venezuela.

Popularizing the traditional Japanese combat sport in crisis-wracked Venezuela, of all places, is an uphill battle.

Here, a wrestler’s most fearsome opponent is not the one staring them down from across the dohyo, or ring, but the country’s overwhelming economic crisis.

Despite the struggle, Duglexer Gonzalez says with a sense of pride: “Sumo in Venezuela? Yes. Here in Venezuela, can you believe, we have sumo.”

Known by his sumo moniker of “King Musampa,” he was one of the first practitioners of the discipline in the Caribbean country and now heads the fledgling national federation.

“We’re fighting against taboos and high costs,” he said.

The pioneering “rikishi” or fighter, is one of the reasons why sumo is slowly winning recognition in baseball-mad Venezuela, though still far behind popular sports like football, basketball and boxing.

“We are not simply fat!” says Musampa, emphatically.

However, their chosen path to sporting immortality is fraught with problems in a country where basic foods are scarce and hyperinflation means prices can rise daily.

Walter Rivas laments the fact that like most Venezuelans, he faces a relentless struggle to keep his weight up.

A recent study found 60 percent of Venezuelans had lost an average 11 kilos in bodyweight due to the crisis, which has caused an exodus of nearly two million people since 2015.

A professional Japanese rikishi can weigh as much as 150 kilos or 330 pounds.

Launching his muscular 5-foot-8 frame at opponents, and using speed and technique to compensate for his relative lightness, he became South American champion two years ago.

If the hallowed sport is bathed in ritual in Japan – salt is sprinkled on the dohyu before a bout, and rikishi wear their hair in a knot – it is largely dispensed with here, where increasing calorie intake is the priority.

Men competing at a high level need to consume 10,000 calories a day, said Musampa, quite a feat in Venezuela.

In an ideal world, that would mean five or six meals a day, with 300 grams of protein in each meal, as well as fruit and vegetables.

A woman in the top weight division needs between 6,500 and 7,500 calories a day, he said as he watched a training session in the Brigido Iriarte stadium in Caracas.

Venezuela’s sumo team is supported by the National Sports Institute (IND) to cover the nutritional needs of its members before and during competitions, but things get complicated when there are no upcoming tournaments.

“When there’s an important championship one consumes more calories, more protein, to be a little more up to the weight, but with the situation the way it is, one has to eat whatever there is,” explained Rivas, who earns a living as a gym instructor in the western city of Barquisimeto.

Nutrition is not the only problem.

Given its cruel lack of resources, Venezuela had to pull out of the last South American Championship in September in Sao Paulo, Latin America’s combat sport mecca.

That meant frustration for the sumo team of 6 athletes, 3 men and 3 women. “It hurt us,” said Musampa.

The crisis is hitting Venezuelan sport across the board.

Boxing, volleyball, softball and fencing teams, among others, have had to pull out of recent international tournaments. Boxer Yoel Finol – silver medalist at the Rio Olympics – couldn’t travel to the recent Central American and Caribbean Games, a key preparation for the Tokyo Olympics.

“With more competitive edge, we can achieve great things,” Eukaris Pereira, one of the sumo athletes, told AFP.

Sumo made its official bow in Venezuela in 2012, with the first national championship in the northern city of Maracay.

“We were the first generation of sumotoris in Venezuela. We came to the sport from other disciplines – wrestling, judo, sambo,” said Musampa, who competed with a tattoo of late president Hugo Chavez on his left arm.

“Today we have 36 clubs and world class athletes like Maria Cedello” – a medalist at international events.

Little by little, more athletes are joining the sport.

Rivas, who came to sumo from wrestling, admitted to being intimidated by the sport’s trademark groin-girding belt, the mawashi.

“A friend was trying to get me interested for a while. But I was always put off by having to wear the mawashi.” – Rappler.com