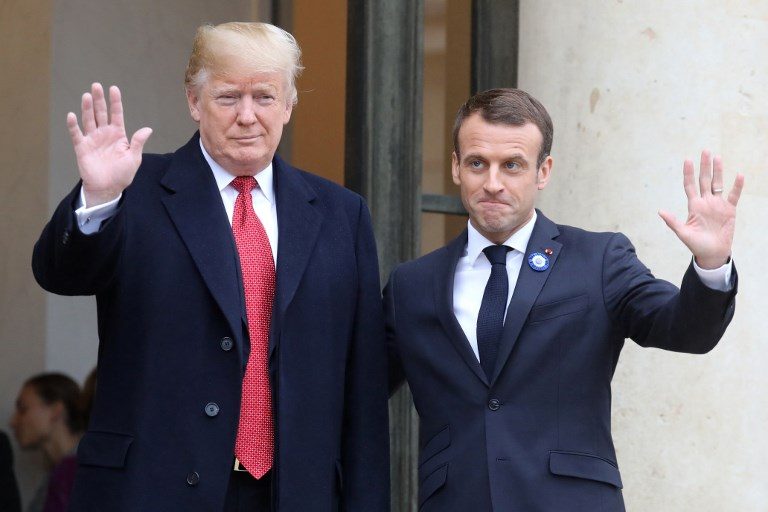 PARIS, France – France on Saturday, November 10 attempted to defuse a row sparked by President Emmanuel Macron’s comments about a European army which angered US President Donald Trump, suggesting his remarks had been misinterpreted.

Trump arrived in Paris for World War 1 commemorations on Friday night, November 9, blasting what he termed “very insulting” remarks from Macron who had mentioned the US alongside China, Russia as national security threats earlier this week.

Macron’s office on Saturday acknowledged that his remarks “could create confusion” but stressed: “He never said we need a European army against the United States.”

Many news organizations, including Agence France-Presse, quoted from the following remarks from Macron during his interview with Europe 1 radio on Tuesday.

“We are being hit by attempted break-ins in cyberspace and interventions elsewhere in our democratic lives,” Macron said.

“We have to protect ourselves with respect to China, Russia and even the United States.

“When I see President Trump announce a few weeks ago that he will pull out of a major disarmament treaty, which was signed after the euromissile crisis in the middle of the 1980s which struck Europe.

“Who is the principal victim? Europe and its security,” he concluded.

Macron went on to make the case for a “true European army” that would give Europe strategic autonomy, meaning that it would no longer have to depend on the US for its security.

Trump’s uncertain support for the transatlantic military alliance NATO, which Europe has relied on since World War II, has led to a reassessment of Europe’s security needs in many European capitals.

German Chancellor Angela Merkel has also publicly stated that Europe can no longer rely on US military might alone.

One of the French president’s closest political allies attacked Trump on Saturday morning.

Richard Ferrand, a founding member of Macron’s political party, said there was “an aggressive side” to Trump’s tweet on Friday night about Macron.

The messages were “the word of a traveling salesman who in many ways wants to promote sales of American arms while we want to ensure that Europe… is able to defend itself and produce its own weapons to defend itself,” Ferrand told Europe 1 radio.

Ferrand is parliamentary speaker in the lower house of parliament. – Rappler.com