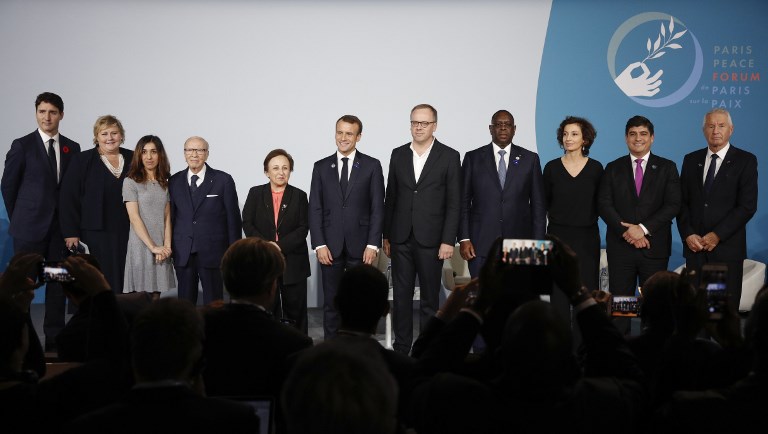 PARIS, France – In a historic step in the context of the Paris Peace Forum today, 12 countries launched a political process aimed at providing democratic guarantees for news and information and freedom of opinion – a process based on the declaration issued last week by an independent commission that was created at the initiative of Reporters Without Borders (RSF)

In taking what could be the most significant initiative in defense of the freedom, independence, pluralism and reliability of news and information since the adoption of the Universal Declaration of Human Rights in 1948, the 12 states responded to an appeal from the Commission on Information and Democracy chaired by RSF secretary-general Christophe Deloire and Nobel peace laureate Shirin Ebadi.

For the launch of this initiative, six heads of state or government met for an hour today – from 5 to 6 pm – in the Paris Peace Forum press room in the Grande Halle de la Villette in Paris.

Presenting the Declaration on Information and Democracy together with Ebadi, Deloire told them: “Reporters Without Borders initiated this Commission on Information and Democracy at a time when democracy is undergoing a deep crisis that is also a systemic crisis in the public space (…) with rumours, systematic disinformation, the undermining of quality journalism and often extreme violence against reporters. But we have a duty to examine the structural causes behind these phenomena and to take the appropriate measures (…) because open democracies are bearing the brunt of this turmoil while despotic regimes are exploiting it.”

French President Emmanuel Macron, who had received the Commission on Information and Democracy at the Elysée Palace on 11 September, the date of its first meeting in Paris, said: “We are at a major turning point today, 70 years after the adoption of the Universal Declaration of Human Rights, because freedom of opinion and expression, which underpins our democracies and whose progress we had assumed to be irreversible, is in fact again threatened and questioned.”

Macron added: “I support your initiative and I am in favor of our agreeing on a set of undertakings based on the declaration presented today. I am in favour of our trying to get as many other countries as possible to join in these undertakings. And I am in favour of our creating a group of internationational experts on this subject, because there is no happiness without freedom and no freedom without courage. You decided to do your duty and I think we, as heads of state and govenrment, should do the same. I would therefore like to say here that France is fully committed to backing this and I thank my fellow heads of state and govenrment here today, who I know share this commitment.”

Recalling her country’s readiness to rally behind calls for international peace and security, human rights and sustainable development, Solberg said: “A global communication and information space built on the freedom of expression is essential (…) Without freedom of expression and a real communication and information space, rule of law is at risk. Carefully built institutions could be undermined.”

Commending RSF’s work in defence of journalists and press freedom, Senegal’s President Sall said: “In Africa, there is an ever-stronger determination to guarantee the protection of journalists and to create the conditions for this process to be carried out properly (…) I fully commit to supporting the Pledge for Information and Democracy.”

In his speech, Tunisia’s President Essebsi also said he also fully supported the political process for information and democracy. “We came here to tell you: yes, we are in favour of this initiative and it is the future that will provide us with the proof of this.”

Canada’s Prime Minister Trudeau stressed the duty of the leaders of free democracies to “support the need to have strong and independent media in which our fellow citizens have confidence.” Canada, he said “undertakes to defend a free press through the Commission initiated by Reporters Without Borders.”

The Costa Rican president highlighted the importance of preserving “a pluralist and free public space and access to information.” He added: “Pluralism and freedom of opinion must be guaranteed. Access to factual data and access to knowledge, especially knowledge of actual events, are a fundamental right.”

UNESCO director-general Audrey Azoulay and Council of Europe secretary general Thorbjørn Jagland expressed their support from the podium, while UN secretary-general Antonio Guterres spoke via a video message recorded a few days ago.

Guterres said: “I therefore commend your initiative to establish a Commission on Information and Democracy. It comes at a crucial time when new means of communicating and disseminating information are transforming our world. Access to relevant and reliable information is therefore even more fundamental than ever. Yet, more and more, it is under threat (…) Now more than ever, we must reaffirm the importance of rigorous public debate that is informed, pluralistic and respectful. I thank you for helping to lead the way.”

The democratic countries participating in the initiative – approached by RSF on the basis of their respect for democratic standards, their World Press Freedom Index rankings, and the personal qualities of their leaders ­– undertook to defend democratic guarantees in the global information and communication space by taking the International Declaration on Information and Democracy, published on 5 November, as their benchmark

After commending the Information and Democracy Commission’s work, the heads of state and government announced that they had “decided to form an initiative for information and democracy based on the principles set out in this declaration” and that, through this initiative, they would renew their commitment towards the right to exercise freedom of opinion and expression, and would “define the objectives to be pursued in order to achieve the full realization of these freedoms in the technological and political context of the 21st century.”

“We thank the heads of state and government for hearing our appeal, Deloire said in reply, calling for the creation of “an International Group of Information and Democracy Experts, akin to what the IPCC is for climate change.” Deloire added: “The comparison with the climate process is not accidental. Like climate, the information ecosystem is unregulated. And, as with the climate, so too for information and democracy, there is a danger that things will spiral out of control. We are close to the breaking point.”

Five of the Commission members who attended the meeting also spoke, pointing out that journalism is exposed to many threats but is needed more than ever in order to protect democracy. The Indian economist Amartya Sen said: “We need information that is realiable, that is not corrupt. And, as the Commission has stressed, one of the biggest scourges we face today is corrupt news.”