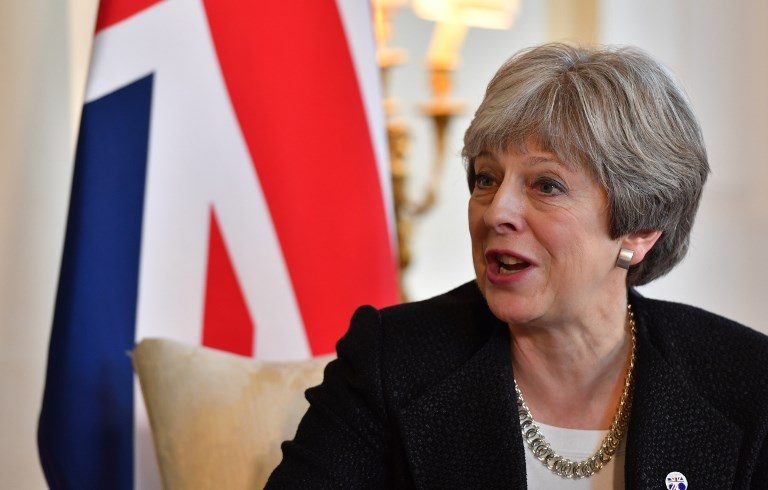 Facebook Twitter Copy URL
Copied
The British Prime Minister begins selling her Brexit deal to parliament, boosted by news that Europe is preparing a rapid summit to sign off on the agreement

LONDON, United Kingdom – British Prime Minister Theresa May will on Thursday, November 15, begin trying to sell her Brexit deal to parliament, boosted by news that Europe is preparing a rapid summit to sign off on the agreement.

She will set out the terms of the draft withdrawal agreement with the European Union to the House of Commons, which must approve the deal before Brexit on March 29.

European Council President Donald Tusk said in Brussels that unless problems emerge as EU member states examine the deal, he will host a summit to sign the accord in Brussels on November 25.

May won her cabinet’s approval for the agreement during a 5-hour meeting on Wednesday, November 14, an important step that helped allay growing fears in the business community of a disorderly divorce.

May’s Conservative Party was already split between Brexiteers and those who wanted to remain in the union, and now many on both sides of that divide oppose her deal.

She suffered a blow on Thursday morning as junior Northern Ireland minister Shailesh Vara resigned saying the withdrawal agreement fails to leave the UK as a “sovereign, independent country”.

The volatility of the pound on Wednesday – plunging on unfounded reports of resignations before rebounding – highlighted how much uncertainty there remains around Brexit.

In particular, the outraged response by many MPs to the deal has heightened concerns that even when finalized, it will not pass parliament.

Hardline Brexit supporters in the ruling Conservative party have cried betrayal over the agreement’s vision of a close future relationship between Britain and the EU.

Veteran MP Peter Bone warned May on Wednesday that she risked losing the support of “many Conservative MPs and millions of voters”.

Jacob Rees-Mogg, leader of an influential group of anti-EU MPs, urged colleagues to reject the deal.

Former UK Independence Party (UKIP) leader Nigel Farage, a key figure in the 2016 Brexit vote, said it was “the worst deal in history”.

May insisted it “brings back control of our money, laws and borders, ends free movement (of people), protects jobs, security and our union”.

But she conceded there were “difficult days ahead” as she seeks to woo MPs.

Speaking in Brussels, Tusk said EU member states would have until Tuesday next week to examine the deal and to agree the wording of a parallel political statement setting out goals for the bloc’s future relations with London.

Ater that, preparations will begin for an EU summit on the following Sunday to sign the deal.

“Finally, let me say this to our British friends,” he said. “As much as I am sad to see you leave, I will do everything to make this farewell the least painful possible, both for you and for us.”

The deal covers citizens’ rights, Britain’s financial settlement and plans for a post-Brexit transition period during which both sides hope to agree a new trade deal.

The most controversial element is a “backstop” plan to keep Britain in a customs union with the EU until a trade deal is agreed that avoids the need for border checks with Ireland.

Many Brexiteers fear this would leave Britain a “vassal state”, tied to the bloc indefinitely.

The same arrangement would see even closer alignment for the British province of Northern Ireland, something May’s allies, the Democratic Unionist Party (DUP), are resisting.

With the DUP’s support, the Conservatives have a slender majority in the 650-seat House of Commons, but the scale of the rebellions have left May courting opposition MPs.

The prime minister also met on Wednesday with Labour leader Jeremy Corbyn, who has indicated he will reject the Brexit deal.

But individual Labour MPs fear it is preferable to no deal at all.

In a statement outside Downing Street late Wednesday, May said her deal was “the best that could be negotiated”.

She said if MPs rejected it they faced Britain leaving without agreement, which experts says could lead to potentially catastrophic economic and legal disruption.

She also raised the risk of “no Brexit at all”, a warning likely intended for her euroskeptic MPs but which was seized upon with enthusiasm by campaigners for a second referendum.

A small but growing number of Conservative MPs back a second vote with the option to stay in the EU, although May has rejected the idea. – Rappler.com