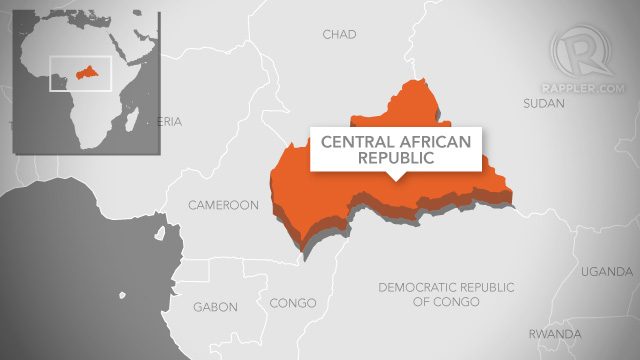 Facebook Twitter Copy URL
Copied
The charred body of a priest has been recovered in the central town of Alindao, where sectarian clashes have claimed at least 37 lives this week, says Catholic Church

The soldier died in hospital late Friday, November 17 of injuries sustained in the raid on a military base in Gbambia in the country’s west, the UN mission MINUSCA said.

The attack, which started at about 20:00 GMT, lasted for some 45 minutes and sent residents fleeing into the bush, the UN said.

An armed group called Siriri, created this year by Fulani cattle herders, operates in the area. Led by a man named Ardo Abba, its purported aim is to thwart attacks by cattle rustlers.

The UN said the group had attacked Gbambia in mid-June. A Tanzanian UN peacekeeper died the same month after Siriri staged an ambush in the region.

Meanwhile, the charred body of a priest has been recovered in the central town of Alindao, where sectarian clashes have claimed at least 37 lives this week, the Catholic Church said Saturday.

“We found his charred body,” Father Mathieu Bondobo, the vicar-general of the main cathedral in the capital Bangui told Agence France-Presse.

The UN on Friday said 37 deaths were confirmed in Alindao – including another priest – while some 20,000 people were affected by the violence. “Thousands” were forced to flee.

A church was burnt.

Alindao is a stronghold of the Union for Peace in CAR (UPC) Muslim militia. It has witnessed chronic fighting in recent months that has also killed two UN soldiers and a humanitarian aid worker.

“This vicious cycle of repeated attacks against civilians is unacceptable. Civilians want security, peace and a future,” said Najat Rochdi, UN humanitarian coordinator in the CAR.

One of the world’s poorest nations despite a rich supply of diamonds and uranium, the CAR has struggled to recover from a 2013 civil war that erupted when President Francois Bozize, a Christian, was overthrown by mainly Muslim Seleka rebels.

In response, Christians, who account for about 80 percent of the population, organized vigilante units dubbed “anti-balaka”.

Alindao lies on a critical route traversing the south and east of the country and is in the heart of a region with numerous gold and diamond mines that have helped fuel the conflict.

In September, the UN warned of a “disastrous” humanitarian situation in the region, which it said was under the control of armed groups.

The government controls only a small part of CAR’s national territory. Armed groups clash in the provinces for control of resources, including diamonds, gold and livestock.

The UN has about 12,500 personnel deployed in Central Africa as part of its MINUSCA mission, one of the world body’s largest peacekeeping forces.

The UN Security Council voted Thursday, November 15, to temporarily renew the mandate of the mission until December, amid heated debates about its ability to stem the unrest. – Rappler.com