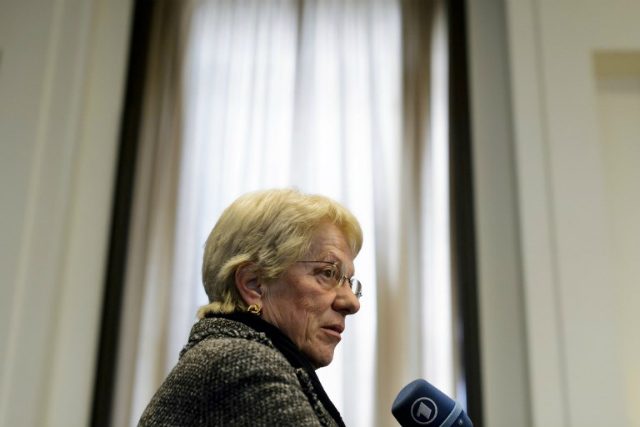 Facebook Twitter Copy URL
Copied
Carla del Ponte reiterates her frustration at the lack of accountability for the horrendous crimes committed in Syria, where more than 360,000 people have been killed since the conflict erupted in 2011

GENEVA, Switzerland – Former war crimes prosecutor Carla del Ponte, who for years was part of a UN commission probing rights abuses in Syria, is calling for reform of the UN “talk shop.”

She also argued that the upholding of human rights had reached a low point, questioning if they still existed.

“The UN is a big disappointment to me,” she told Swiss weekly NZZ Am Sonntag in an interview published Sunday, November 18, insisting that “the UN should be reorganized.”

Del Ponte, a 71-year-old Swiss national who came to prominence investigating war crimes in Rwanda and the former Yugoslavia, was part of the UN Commission of Inquiry on Syria for 5 years, before slamming the door last year.

During her time working with the commission, which is tasked with investigating human rights violations and war crimes in Syria’s brutal civil war, Del Ponte said she was disappointed to find that the UN was basically a “talk shop.”

“There are lots of civil servants, too many. Only a few of them really do any work,” she lamented.

Del Ponte, known for her frankness, reiterated her frustration at the lack of accountability for the horrendous crimes committed in Syria, where more than 360,000 people have been killed since the conflict erupted in 2011.

“We had hoped that the International Criminal Court or an ad hoc court would deal with the war crimes in Syria,” she said, criticising the blocked UN Security Council for standing in the way of such a process by “doing nothing”.

She also criticized the UN Human Rights Council in Geneva. Half of the 47 countries that currently hold rotating membership, including the likes of China, Saudi Arabia and Burundi, “are violating human rights on a daily basis,” she maintained.

“They should be thrown out. Immediately,” she said.

She joked that she had been asked at a recent event if she would consider becoming UN Secretary-General, a job she said she would gladly take.

“But I would probably not last in office for long.”

Del Ponte, who said she is planning to retire for good at the end of this year, warned that international justice as a whole was currently in a sorry state.

“We have reached a low point,” she told the paper.

“Human rights are no longer valid. We have to ask ourselves today if they still exist,” she said.

But she stressed that “we have no choice but to believe in human rights.”

“We must believe that an independent international court can bring justice.” – Rappler.com