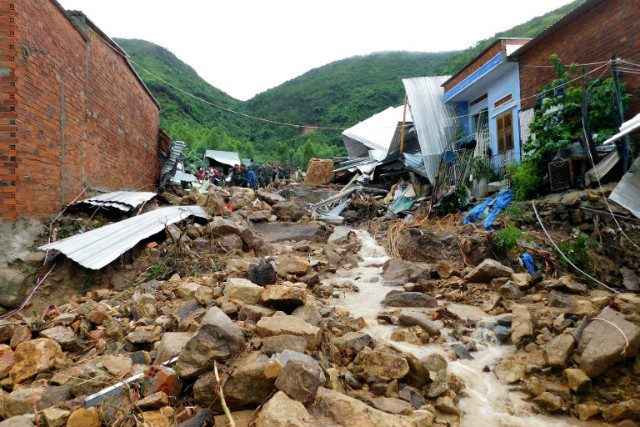 HANOI, Vietnam – Flash floods and landslides killed at least 12 people in central Vietnam, officials said Sunday, November 18, as hundreds of troops were dispatched to clean up destroyed villages and washed out roads.

Heavy rains pounded the central Khanh Hoa province over the past few days as tropical depression Toraji blew in from the South China Sea, triggering landslides that wiped out houses and destroyed a small reservoir.

At least a dozen people have been killed so far while a search was ongoing for several others, an official from the provincial disaster office told Agence France-Presse, refusing to be named.

“We have mobilized hundreds of army troops to help people restore lives and clean up damaged roads,” he said.

The main highway linking north and south Vietnam was temporarily blocked and some railway routes were interrupted, while images on state media showed destroyed houses buried under debris and vehicles submerged in floods.

Panicked residents told of running from their homes as landslides rumbled down nearby mountains.

“We ran away after hearing the huge sound of fallen rocks… When we returned a few hours later, all our houses were destroyed,” said Nha Trang city resident Liem, quoted by Khanh Hoa province’s official online news site.

Vietnam is routinely hit by heavy rains during typhoon season from May to October.

At least 185 people have been killed in natural disasters across Vietnam since January.