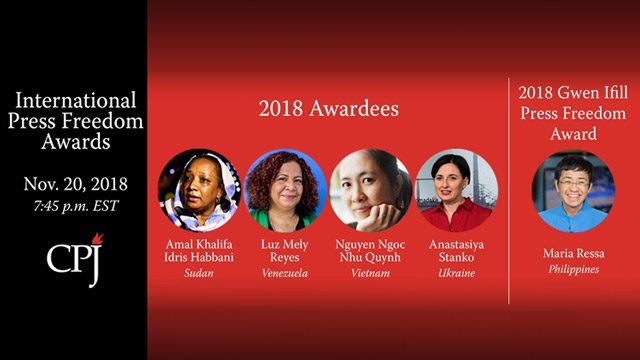 Amal Khalifa Idris Habbani, a freelance journalist and contributor to the Sudanese news outlet Al-Taghyeer, who during her decade-long career in Sudan has faced physical attacks, imprisonment, and threats by the authorities in connection with her coverage of protests and official wrongdoing.

Nguyen Ngoc Nhu Quynh, one of Vietnam’s most prominent independent bloggers, who is best known by her penname, “Mother Mushroom.” She has been imprisoned since 2016 on charges connected to her coverage of sensitive issues censored by the state-controlled media, including official land-grabbing, environmental degradation, and police brutality.

Luz Mely Reyes, a Venezuelan investigative reporter and co-founder of the independent news website Efecto Cocuyo, who has covered politics in Venezuela for more than 25 years amid increasingly dangerous and repressive conditions for journalists.

Anastasiya (Nastya) Stanko, a journalist and TV presenter who is a member of the “Stop censorship” movement, an anti-censorship group made up of journalists and media organizations in Ukraine. A co-founder of the independent media channel Hromadske, in 2014 she covered the Russian annexation of Crimea and was taken hostage in eastern Ukraine.

“At a time when journalism is being vilified, mocked, and undermined by so many political leaders, CPJ is recognizing some of the world’s most courageous and dedicated reporters for their contribution to informing their communities and the world,” said CPJ Executive Director Joel Simon. “These journalists put their lives and liberty on the line every day just to do their job. There can be no greater affirmation that journalism matters.”

CPJ’s Gwen Ifill Press Freedom Award will be presented to Maria Ressa, who in 2012 founded Rappler, a Philippine news website renowned for its unflinching coverage of President Rodrigo Duterte’s controversial policies and actions. Ressa has been a celebrated journalist in Asia for more than 30 years, most of them as CNN’s bureau chief in Manila, then Jakarta.

“Maria is the pioneering leader of an inventive organization that aggressively reports news in the Philippines and constantly innovates to keep audiences engaged,” said CPJ Board Chair Kathleen Carroll. “Her bravery in the face of personal and professional attacks is inspiring. We are proud to present her with this award.” – Rappler.com

Winners will be honored at CPJ’s annual award and benefit dinner. This year’s dinner will be chaired by Meher Tatna, president of the Hollywood Foreign Press Association. The evening will be hosted by veteran CBS journalist and “60 Minutes” correspondent Bill Whitaker. The event is at the Grand Hyatt New York in New York City on November 20, 2018.