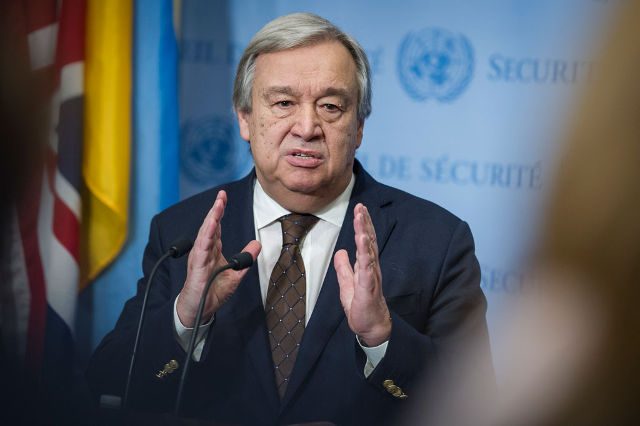 UNITED NATIONS, USA – Ukraine and Russia must exercise “maximum restraint,” UN chief Antonio Guterres said Tuesday, November 27, appealing for a quick reduction in tensions after a naval confrontation sparked the most dangerous crisis in years between the neighbors.

His call came as Russian President Vladimir Putin warned Ukraine against any “reckless acts” after Kiev declared martial law in response to Moscow’s seizure of 3 of its navy vessels.

A statement from the UN secretary general urged both sides “to take steps without delay to contain this incident and reduce tensions through all available peaceful means in accordance with the Charter of the United Nations.”

Guterres underscored “the need to fully respect the rights and obligations of all concerned parties” under international law and said “the sovereignty and territorial integrity of Ukraine, within its internationally recognized borders… must also be fully respected.”

The Ukrainian parliament late Monday, November 26, voted in favor of President Petro Poroshenko’s request for the introduction of martial law in border areas for 30 days.

Martial law gives authorities the power, among others, to mobilize citizens with military experience.

The move came after Russian forces fired on, boarded and captured three of Kiev’s ships on Sunday off the coast of Crimea, the first major confrontation at sea in the long-running conflict pitting Ukraine against Moscow and Russian-backed separatists in the country’s east. – Rappler.com