Trump calls for his ex-lawyer Michael Cohen to be jailed 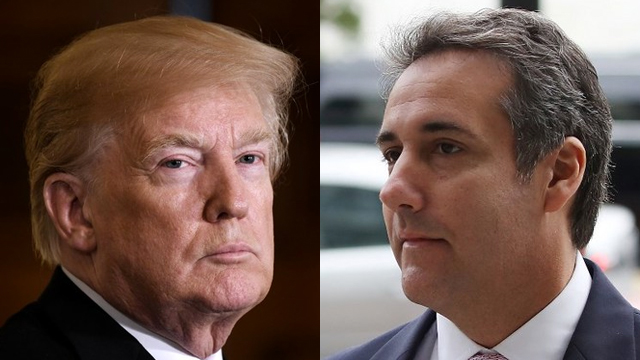 WASHINGTON DC, USA – US President Donald Trump called Monday, December 3, for a long jail term for his ex-lawyer Michael Cohen, who admitted lying to Congress about pursuing a real estate deal with Russia on Trump’s behalf during the 2016 election campaign.

Trump accused Cohen of fabricating stories about his Russia dealings to minimize his sentence on multiple counts of tax evasion, financial fraud and campaign finance violations that he has admitted in federal court in New York.

Last week Cohen also admitted to lying in testimony about contacts with powerful Moscow figures over building a Trump Tower in Moscow.

Those contacts, including with a top aide to President Vladimir Putin, continued throughout the first half of 2016 even after Trump secured the Republican nomination for president, Cohen admitted – contradicting claims by Trump that there were no dealings beyond 2015.

In a pre-sentencing pitch to the court on Friday, November 30, Cohen’s lawyers asked that he be given no jail time, noting his ongoing cooperation with Mueller’s sprawling investigation.

Trump, newly returned from the G20 summit in Buenos Aires, unleashed his ire in a volley of tweets.

“You mean he can do all of the TERRIBLE, unrelated to Trump, things having to do with fraud, big loans, Taxis, etc., and not serve a long prison term?” he said.

“He lied for this outcome and should, in my opinion, serve a full and complete sentence,” Trump added.

“Michael Cohen asks judge for no Prison Time.” You mean he can do all of the TERRIBLE, unrelated to Trump, things having to do with fraud, big loans, Taxis, etc., and not serve a long prison term? He makes up stories to get a GREAT & ALREADY reduced deal for himself, and get…..

….his wife and father-in-law (who has the money?) off Scott Free. He lied for this outcome and should, in my opinion, serve a full and complete sentence.

Once one of the real estate tycoon’s closest allies and a top executive at The Trump Organization, Cohen has become a key witness in Mueller’s investigation into whether the Trump campaign colluded with Russians in 2016.

His revelation in court that Trump and his family were kept informed about contacts over building a Trump Tower in Moscow has ratcheted up the pressure from the investigation on the US president.

Trump has repeatedly labelled the probe an “illegal witch hunt” and accused Mueller Monday of forcing witnesses to make up lies damaging to the president.

“Robert Mueller… and his out of control band of Angry Democrats, don’t want the truth, they only want lies. The truth is very bad for their mission!” Trump tweeted.

The president compared Cohen with Stone, who is also being investigated by Mueller over his possible role in colluding with the Russians during the campaign.

In an ABC News interview on Sunday, December 2, Stone, a veteran Republican political consultant, denied any impropriety and said he would never give evidence against Trump, with whom he has worked for 4 decades.

Trump tweeted that Stone’s comments showed “he will not be forced by a rogue and out of control prosecutor to make up lies and stories about ‘President Trump.'”

“Nice to know that some people still have ‘guts!'” he said.

Legal experts said Trump was empowering the obstruction of justice case against him by using the power of his position to influence witnesses.

“This is genuinely looking like witness tampering…. The fact it’s done out in the open is no defense,” said Neal Katyal, a veteran constitutional lawyer and former acting solicitor general of the Department of Justice. – Rappler.com