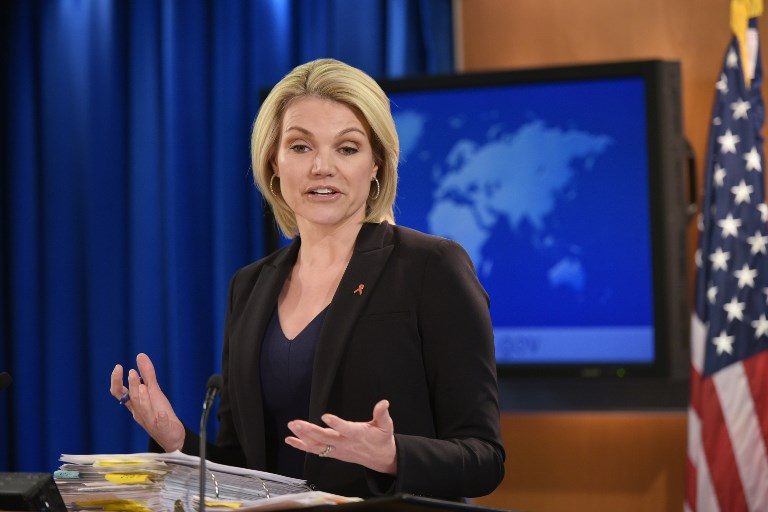 Facebook Twitter Copy URL
Copied
(UPDATED) Trump says Nauert, who is in line to take over from Nikki Haley, had done well at the State Department. 'She's very talented, very smart, very quick, and I think she's going to be respected by all,' Trump said.

WASHINGTON, D.C., USA (UPDATED) – US President Donald Trump on Friday, December 7, nominated State Department spokeswoman and former Fox News anchor Heather Nauert as his next ambassador to the United Nations – a swift elevation for a supporter who had no diplomatic experience until last year.

Nauert, who has shown poise in front of the cameras and mostly avoided gaffes, would succeed Nikki Haley, a former South Carolina governor seen as entertaining ambitions for higher political office.

Trump said he was impressed by the 48-year-old Nauert, a former anchor of “Fox and Friends,” one of the television-loving president’s favorite shows.

“She’s very talented, very smart, very quick, and I think she’s going to be respected by all,” Trump told reporters.

Nauert said on Twitter she was “humbled” by Trump’s confidence in her and looked forward “to continuing the outstanding job Amb. Haley has done representing your administration and the American people.”

Nauert, who had been rumored as the top pick for the job since Haley’s resignation, become the spokeswoman of the State Department after Trump’s election despite no previous background in foreign affairs.

Representative Eliot Engel, the incoming Democratic chairman of the House Foreign Affairs Committee, said he was “uneasy” about Nauert’s lack of experience, as the UN job “requires face-to-face negotiations with important allies and hardened adversaries.”

But the Senate, which alone needs to confirm Nauert, is still under the control of Trump’s Republican Party.

‘Bridge’ between UN and Trump?

UN diplomats said privately they hoped that Nauert will be an advocate for the United Nations within the Trump administration, to counter the anti-UN views of national security adviser John Bolton.

He expressed hope that she will continue to be a “bridge between Washington and the UN at a time when we more than ever need an America that is engaged with the UN in world affairs and committed to our shared values, beginning with human rights.”

In June, the United States quit the UN Human Rights Council, which it sees as biased against Israel.

It is widely expected that the position will lose its current cabinet status, meaning she would be clearly subordinate to Bolton and Secretary of State Mike Pompeo, her current boss.

Pompeo said on Twitter that he had “great confidence” in Nauert and called for her quick confirmation.

Praise for the appointment came from Israel, which has long counted on the United States to veto unfriendly resolutions on the UN Security Council.

“Ms. Nauert has stood by the State of Israel in her previous positions, and I have no doubt that the cooperation between our two countries will continue to strengthen,” Israel’s ambassador to the United Nations, Danny Danon, said in a statement.

Haley, in what could be a final diplomatic push, on Thursday failed in a bid for the UN General Assembly to condemn the Palestinian Islamist movement Hamas for firing rockets at Israel.

But for the United States, the vote also succeeded in reinforcing its stance that the world body is biased against the Jewish state.– Rappler.com