Dec 8, 2018 11:18 PM PHT
Agence France-Presse
Facebook Twitter Copy URL
Copied
The Joint Chiefs of Staff is made up of the heads of the Air Force, Army, Marine Corps, Navy and National Guard 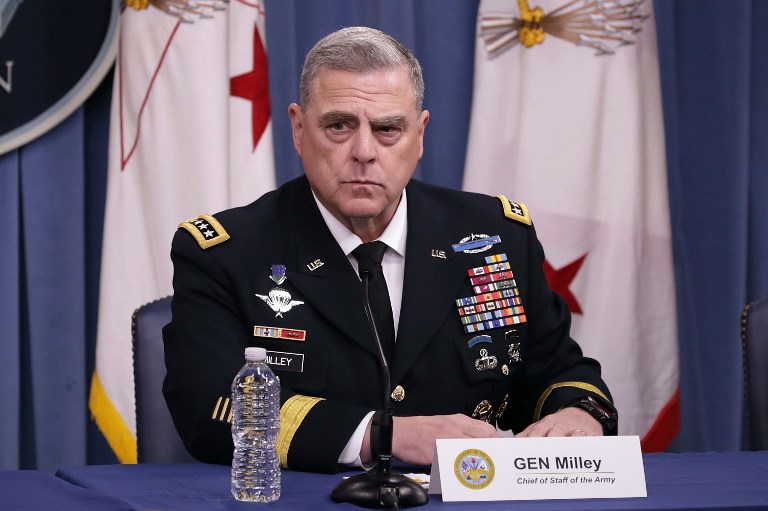 Milley, a four-star general who has served in Iraq and Afghanistan, would replace General Joseph Dunford as the military’s next chairman of the Joint Chiefs of Staff.

Dunford is scheduled to retire in October 2019 at the end of his second two-year term.

The Joint Chiefs of Staff is made up of the heads of the Air Force, Army, Marine Corps, Navy and National Guard.

“I am thankful to both of these incredible men for their service to our Country! Date of transition to be determined,” Trump said on Twitter.

Milley must be confirmed by the US Senate.

Trump announced his picks for a new attorney general and a new UN ambassador on Friday, December 7, and initially suggested he might make the military announcement at Saturday’s annual Army-Navy football game in Philadelphia.

The game features cadets from the Naval Academy against their counterparts from the US Military Academy and is often attended by the president.

But he opted to announce the news on Twitter before heading to the game.

Milley, 60, is a graduate of Princeton University.

According to several US media outlets, Defense Secretary Jim Mattis favored Air Force General David Goldfein, in keeping with a tradition of rotating the post among the services, but Trump preferred Milley.

Dunford is a Marine Corps general. There has not been an Air Force officer in the chairman’s post since 2005. – Rappler.com