Rally to mark 1 year since arrest of Myanmar Reuters journalists 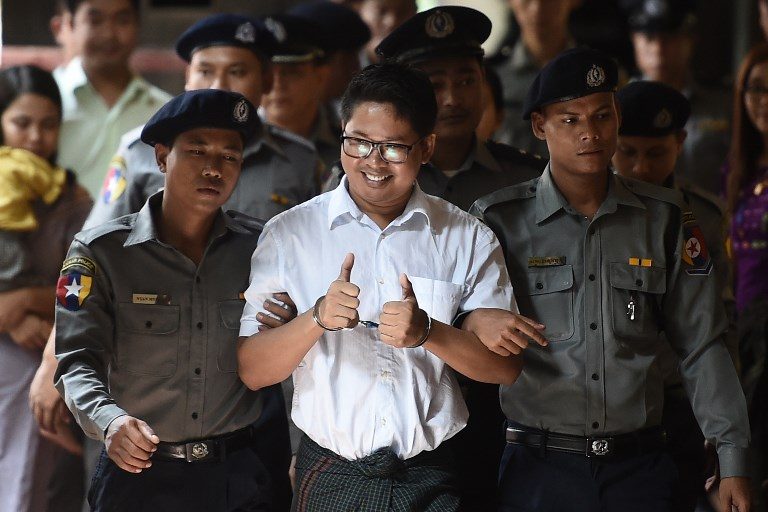 YANGON, Myanmar – Protesters in Yangon Wednesday, December 12, will mark one year since the arrest of two Myanmar Reuters journalists who exposed a massacre of Rohingya Muslims in Rakhine state.

Wa Lone, 32, and Kyaw Soe Oo, 28, were arrested outside a Yangon restaurant on December 12 and later handed 7-year jail sentences after exposing the extrajudicial killing of 10 Rohingya men during the military’s brutal crackdown on the stateless minority last year.

The guilty verdict sparked condemnation from around the world, including from US Vice President Mike Pence, and Reuters hired prominent rights attorney Amal Clooney to assist with the case.

The reporters were also honored among other persecuted or slain journalists in Time magazine’s Person of the Year issue this week.

But despite a tenacious advocacy campaign the two remain behind bars, with an appeal  set for later this month.

Supporters will gather in downtown Yangon Wednesday afternoon as Reuters invites people from around the world to post photos on social media of the “thumbs up” gesture that became a symbol of the pair’s court appearances.

“The fact that they remain in prison for a crime they did not commit calls into question Myanmar’s commitment to democracy, freedom of expression and rule of law,” Reuters editor-in-chief Stephen J Adler said in a statement on the anniversary of the arrest.

“Every day they continue to be behind bars is a missed opportunity for Myanmar to stand up for justice.”

Their trial was widely regarded as a sham – and punishment for reporting on the September 2017 massacre in Inn Din village led by Myanmar security forces.

One whistleblowing police officer told the court his superior ordered a sting to entrap the reporters – testimony the judge chose to ignore.

Myanmar’s civilian leader Aung San Suu Kyi remained defiant when pressed on the case, insisting that due process was followed.

Her reaction further tarnished her image as a democracy icon overseas after she refused to speak up for the Rohingya during bloody “clearance operations” in Rakhine last year.

More than 720,000 Rohingya Muslims fled over the border into refugee camps in Bangladesh, bringing with them horrific reports of widespread murder, torture, rape and arson.

UN investigators have called for the top generals to be prosecuted for genocide and accused Suu Kyi and her government of complicity.

Myanmar rejects almost all allegations, saying it was defending itself against Rohingya militants.

But a court did convict soldiers accused of carrying out the Inn Din massacre to 10 years each. – Rappler.com