Dec 12, 2018 2:37 PM PHT
Agence France-Presse
Facebook Twitter Copy URL
Copied
Judge William Pauley will have to decide if there is room to go easy on Michael Cohen, who has asked for the lightest sentence possible to 'start his life over' 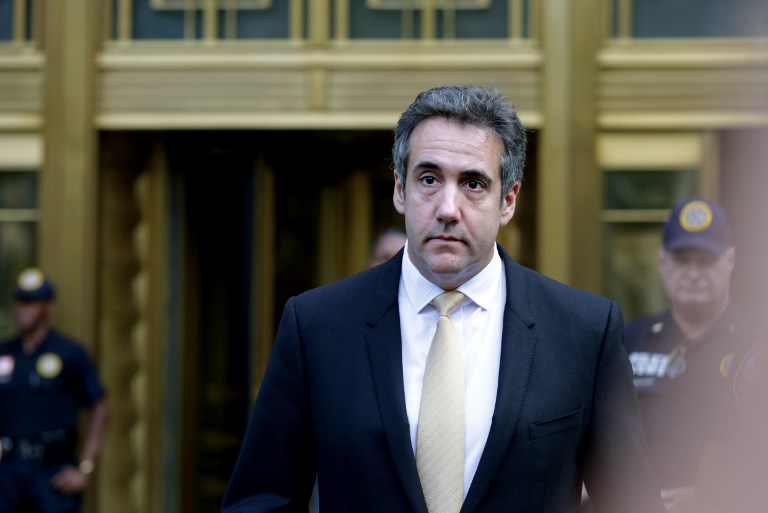 NEW YORK, USA – The hour of judgment has come for Michael Cohen, President Donald Trump’s former personal lawyer, who will learn Wednesday, December 12, if cooperating with authorities conducting the Russia probe will spare him a long prison term.

Cohen, 52, is one of several members of Trump’s team who have run afoul of the law but the only one to belong to Trump’s inner circle.

For 12 years he was vice president of The Trump Organization, the umbrella company for Trump’s real estate businesses, and one of the principal confidants of the New York billionaire.

Cohen accompanied Trump throughout a political ascension which he encouraged, but now has made a spectacular flip.

After investigators raided his offices and New York home in April, he made his confessions.

In August, Cohen admitted to having hidden from tax authorities about $4 million in revenue from his taxi companies.

He also admitted to paying a total of $280,000 to adult film actress Stormy Daniels and former Playboy model Karen McDougal, who threatened to go public during the 2016 presidential campaign about their alleged affairs with Trump.

Last month Cohen acknowledged that he lied to Congress about his contacts with Russia about building a Trump Tower in Moscow.

These confessions transformed him into enemy number one for the American president, who is trying to discredit Special Counsel Robert Mueller’s probe into possible collusion between the Trump campaign and Russia.

According to Cohen, Trump asked for the payments to the two women, but Trump has dismissed the allegations as lies.

According to Trump, those “lies” aim to get lenient treatment for Cohen from Judge William Pauley, who will preside over Cohen’s sentencing from 11:00 am (1500 GMT).

As the Democrats prepare to take control of the House of Representatives in January and Trump’s opponents search for ways to neutralize or shorten his presidency, Cohen has become an anti-hero.

All his appearances and statements are considered potentially explosive and the Manhattan courtroom is likely to be crowded for his expected act of contrition.

Leniency is far from assured. His confessions were not accompanied by a plea deal agreement with prosecutors, which generally brings a lighter sentence in the United States.

In their recommendations to the judge, the New York prosecutors, who investigated the tax evasion and payments to the women, said Cohen the lawyer and businessman had not sufficiently cooperated with them to benefit from a punishment substantially less than that recommended for such crimes: 4 to 5 years in prison.

According to the prosecutors, considered among the toughest in the country, Cohen “declined to be debriefed on other uncharged criminal conduct, if any, in his past.”

They said he also declined to meet with them about “about other areas of investigative interest.”

They said Cohen had minimized the gravity of his crimes, which were marked by “a pattern of deception.”

Paying for the silence of Daniels and McDougal, who otherwise would have made public their alleged affairs with Trump, “struck a blow to one of the core goals of the federal campaign finance laws: transparency,” they said.

“In the process, Cohen deceived the voting public by hiding alleged facts that he believed would have had a substantial effect on the election.”

Although Cohen cooperated with Mueller, providing information about contacts between Trump’s campaign team and Russia, it was “when he knew he was under imminent threat of indictment” in Washington, the New York prosecutors said.

But Mueller said that Cohen, a father of two, had taken “significant steps” to mitigate his lies before Congress.

He also said Cohen gave “relevant and truthful information” touching on the heart of the Russian inquiry, which is now raising questions as to whether a member of Trump’s family – his eldest son Donald Trump Jr or son-in-law Jared Kushner – could be charged next.

Judge Pauley, 66, known for his independence and named 20 years ago by then-president Bill Clinton, will have to decide if there is room to go easy on Cohen, who has asked for the lightest sentence possible to “start his life over.”

Trump’s opinion is already known. In an early-December tweet he said he hoped that the man who betrayed him will get a “full and complete sentence.” – Rappler.com