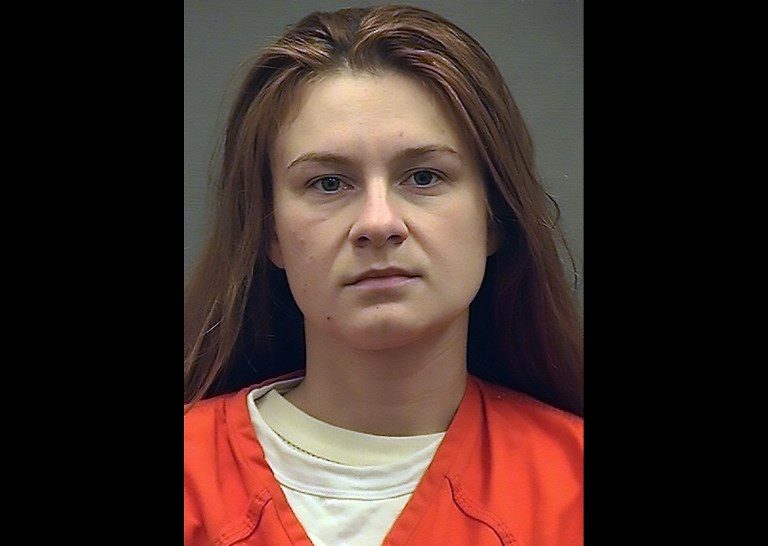 Facebook Twitter Copy URL
Copied
Maria Butina – the first Russian convicted in the sprawl of cases arising from Moscow's interference in the 2016 presidential election – faces up to 6 months in prison, followed by likely deportation

WASHINGTON DC, USA – A Russian national who built a powerful network of Republican contacts via the US gun rights lobby that reached into President Donald Trump’s circle admitted Thursday, December 13, acting as an illegal foreign agent.

Maria Butina – the first Russian convicted in the sprawl of cases arising from Moscow’s interference in the 2016 presidential election – faces up to 6 months in prison, followed by likely deportation.

Prosecutors said she launched a plan in March 2015 to develop ties with the Republican Party with the aim of influencing US foreign policy.

She worked together with her American boyfriend, Republican operative and National Rifle Association insider Paul Erickson, to pursue the plan, they said.

The plot was guided and financed in part by Alexander Torshin, an ally of President Vladimir Putin who was deputy governor of the Russian central bank until his retirement on November 30.

At Torshin’s direction and with Erickson’s assistance, prosecutors said Butina “sought to establish unofficial lines of communications with Americans who having power and influence over US politics.”

“Butina sought to use those unofficial lines of communication for the benefit of the Russian Federation,” they said.

Butina’s case was a spinoff from Special Counsel Robert Mueller’s investigation into Moscow’s meddling in the 2016 election and possible collusion by the Trump campaign with the Russians.

Her guilty plea came one day after the sentencing of Trump’s former personal lawyer Michael Cohen, who implicated the president in felony violations of campaign financing laws.

Cohen alleged Trump directed him to make payments during the 2016 presidential campaign to silence two women who claimed to have had past sexual encounters with Trump, the Republican candidate.

Butina’s contacts took her into the high echelons of the Republican hierarchy.

She started by setting up her own Russian gun rights organization, supported by Torshin, and then making contact with the NRA.

In April 2015 she joined the NRA national convention where she had her picture taken with prominent Republicans and was introduced to an unidentified Republican presidential candidate, according to prosecutors.

Eight months later she invited a number of current and former leaders of the NRA to Moscow where they were able to meet high-level Russian officials.

Her contacts took her into close proximity with Trump.

At a Trump rally in Las Vegas in July 2015 she was selected to ask him a question about his plans for ties with Russia.

“I believe I would get along very nicely with Putin… I don’t think you’d need the sanctions,” he said, in possibly his first campaign trail pronouncement on the issue.

In 2016 she entered graduate school at American University in Washington, and continued her networking as she lived with Erickson.

He helped her contact a senior official on the Trump campaign, Rick Dearborn, proposing a meeting between Trump and Putin before the election.

Following up that offer, in early May 2016, Torshin attended an official dinner during the NRA’s annual convention in Louisville, Kentucky, where he reportedly spoke with Trump’s son Don Jr.

Butina was arrested on July 15, 2018 and became a minor cause célèbre in Russia, with the foreign ministry putting her picture at the top of their Twitter account with the hashtag “#FreeMariaButina”.

She pleaded guilty to conspiracy to not register as an agent of a foreign government, a charge often used against foreign spies. But there was no evidence presented that she worked for any of Moscow’s espionage agencies.

The conspiracy charge, and prosecutors’ vouching for her cooperation in a broader investigation, suggested others could be charged in relation to her case.

She was to remain in US custody until her sentencing, in February or later, and was expected to continue cooperating with investigations. – Rappler.com