‘Worse every day’: Afghans expect 2019 to be even deadlier 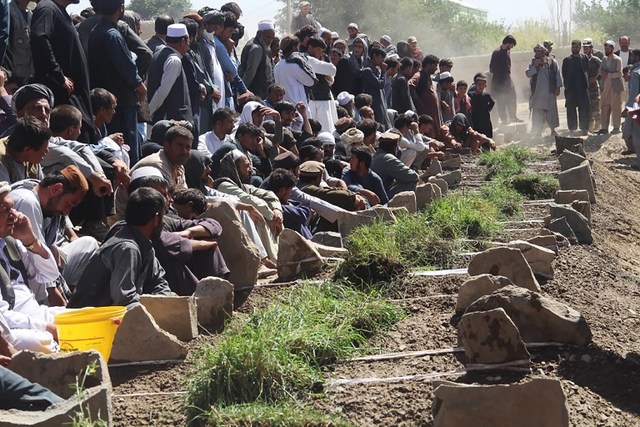 KABUL, Afghanistan – After a year of record bloodshed, Afghans are bracing for an even deadlier 2019 with the threat of a United States (US) drawdown and a looming presidential vote likely to fuel violence.

President Donald Trump’s plan to slash the number of US soldiers in Afghanistan before negotiators have struck a peace deal with the Taliban has crushed hopes among many Afghans for an end to the 17-year conflict. (READ: Taliban urge U.S. to exit Afghanistan or face Soviet-style defeat)

The news, which the White House has not confirmed, capped an annus horribilis for the war-weary country which by some estimates has overtaken Syria as the world’s deadliest conflict zone this year.

Ordinary Afghans, who have long borne the brunt of the relentless fighting, told AFP they felt increasingly despondent about the future as the Taliban and the Islamic State (ISIS) group adapt to ramped up security to carry out almost daily attacks on civilians and security forces.

“It is getting worse every day,” said electrical engineering student Mohammad Hussain in Kabul, one of the deadliest places in the country for civilians.

“The security we had 4 or 5 years back was better than now. Even when we don’t have attacks in Kabul, we are waiting for something to happen,” he added.

Zabihullah Shirzad, who owns a garbage collecting company in the Afghan capital, said he could not remember a bloodier year than 2018 and predicted 2019 would be even deadlier.

“We will see more killing and bloodshed,” the 42-year-old said. “I am not optimistic about the peace talks.”

Their gloomy comments reflect the findings of a Gallup poll published in October, which showed an unprecedented level of pessimism among Afghans.

And an Asia Foundation study in December suggested more than 60% of Afghans thought the country was moving in the wrong direction – unchanged from a year earlier.

Civilian deaths hit a record high in the first half of the year, while the Taliban are slaughtering Afghan forces in greater numbers than ever before.

This year was also marked by some of the deadliest suicide attacks since the start of the war in 2001, including an ambulance bomb blast that targeted a crowded street in Kabul in January, killing more than 100 people and wounding hundreds more.

The bloodshed was exacerbated by Trump’s more aggressive strategy for Afghanistan, which he reluctantly announced in August 2017, putting thousands more US boots on the ground and giving its air units greater leeway to go after the Taliban and IS.

One estimate puts the number of conflict-related deaths at more than 40,000 this year – almost equal to the combined total for Syria and Yemen – according to data compiled by the US-based Armed Conflict Location and Event Data Project.

Adding to the misery was the worst drought in recent history, which forced more than 250,000 people to abandon their homes, overwhelming humanitarian agencies as they struggled to provide enough food and shelter.

Thousands of displaced families have set up makeshift tents on the edge of cities, and some are even selling their young daughters into marriage to repay debt or buy food.

“It was a very bad year – the situation has not improved at all,” said Thomas Ruttig, co-director of Afghanistan Analysts Network.

Some observers saw positive signs that, if the circumstances are right, could translate into good news in 2019.

An unprecedented 3-day ceasefire in June was widely celebrated by Afghans taking selfies and sharing ice cream with Taliban fighters, seemingly underscoring the desire for peace on both sides.

And the insurgents’ apparent willingness to meet with US officials as part of a push for peace talks in recent months could bode well for a deal, said Lotfullah Najafizada, director of Afghanistan’s largest private broadcaster Tolo News.

“I think Afghanistan will pass 2019 with some success. I hope it will be a historic year,” Najafizada said.

But slashing US troop numbers – which many fear would be a harbinger for a full withdrawal – before any deal is struck could trigger a civil war “with a regional dimension,” warned Davood Moradian, director general of the Afghan Institute for Strategic Studies.

Ruttig said Washington should put Afghanistan’s need for peace ahead of its own desire to pull out troops and save money.

“They are as much a part of the problem as they could be the solution,” he said, describing US policy in Afghanistan as “dysfunctional,” he said.

Another spoiler in 2019 could be Afghanistan’s presidential election, originally scheduled for April 20 but now likely to be pushed back to the summer.

The vote, which President Ashraf Ghani plans to contest, could unleash a similar wave of violence that marred October’s shambolic and bloody parliamentary election.

But after so many years of war, Afghans are “more resilient” and the country would survive, Moradian said.

“Many Afghans have learned to live with the chronic pain of war,” he said.

“That pain does not stop them pursuing a normal life.” – Rappler.com