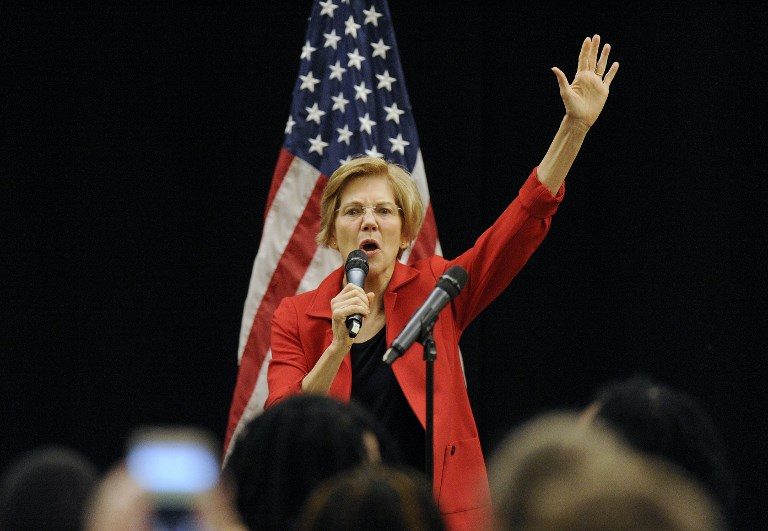 The 69-year-old progressive announced she was launching an exploratory committee for president, becoming the first major candidate in what is set to be an extraordinarily crowded Democratic primary, united by a singular focus on unseating the Republican Trump.

The move will help Warren raise funds and hire more staff early in the campaign cycle – an effort in which she already leads most other potential Democratic candidates.

Her announcement came 13 months before the Iowa caucuses that launch what is expected to be a boisterous primary season.

“America’s middle class is under attack,” said a video message from Warren, who has represented Massachusetts in the Senate since 2013, crafting a reputation as an economic populist.

“Corruption is poisoning our democracy,” she said. “Politicians look the other way while big insurance companies deny patients life-saving coverage, while big banks rip off consumers and while big oil companies destroy this planet.”

That, she said, is why she is launching her exploratory committee.

Going on the ‘offense’

A former public-school teacher and then Harvard law professor, Warren has been a vocal advocate of consumer and workers’ rights. But Americans may know her best for her frequent sparring with Trump – which has had mixed results.

Warren’s searing criticisms of Trump’s trade policies, erosion of consumer protections, and openness to authoritarian regimes – not to mention her call in September for Congress to use a constitutional maneuver to remove him from office – have drawn his attention, and his disdain.

At his election-style rallies, Trump took to mocking her claim to have some Native American heritage by dubbing her “Pocahontas,” a derisive reference to the 17th century Native American who lived in what is now Virginia.

When Trump offered to donate $1 million to Warren’s favorite charity if she took a test proving “you’re an Indian,” she eventually did so, hoping to put an end to his ridicule.

Instead, he seemed to relish the fact that the test showed her with only a sliver of Native American heritage.

But another encounter with a powerful male politician gave Warren a place in political folklore.

After she clashed in 2017 on the Senate floor with top Republican Mitch McConnell over the nomination of Jeff Sessions as attorney general and refused to back down, his phrase “Nevertheless, she persisted” was quickly adopted by feminists – and turned into T-shirts and bumper stickers.

As talk of a possible presidential run grew, Warren has worked to build her foreign policy credentials, taking a seat on the Senate Armed Services Committee. She favors cuts in military spending and a troop withdrawal from Afghanistan.

Her domestic policies are reliably liberal: She is staunchly pro-choice on abortion, supports gun control and has urged Democrats to go on “offense” to expand health care coverage for Americans.

But her bread-and-butter issue has been the defense of ordinary Americans against abuses by those with wealth and power. She sharply criticized Wall Street after the 2007 financial crisis and helped establish the Consumer Financial Protection Bureau.

“How did we get here? Billionaires and big corporations decided they wanted more of the pie, and they enlisted politicians to cut them a fatter slice,” she said in her video.

With as many as 3 dozen Democrats weighing possible presidential bids, the road to the nomination will be arduous.

Among those who have already declared their intention to run are Julian Castro, a former housing secretary in Barack Obama’s administration, Maryland Representative John Delaney and Richard Ojeda, a former army paratrooper currently serving as a state senator in West Virginia.

Polls for now show Warren trailing veteran politicians like former Vice President Joe Biden and Senator Bernie Sanders, both in their 70s – as well as rising young star Beto O’Rourke, who is 46.

But analyst Nate Silver said on Twitter that Warren “probably has a better chance than Sanders of bridging the gap between the left and the party establishment.”

“She’s always raised a ton of money. Voters know what she stands for. Women did well in the 2018 primaries,” Silver added.

Warren has built the framework of a serious campaign, with a staff of more than 70 people, $12.5 million left over from her successful re-election effort, and a nationwide network of contacts and supporters.

As she seeks to raise her profile, Warren likes to tell how she grew up in the Central Plains state of Oklahoma, in a family she said lived “on the ragged edge of the middle class.”

After her father suffered a heart attack, she went to work at age 13 waiting tables in a restaurant – life experience she says gives her a visceral connection to ordinary Americans. – Rappler.com